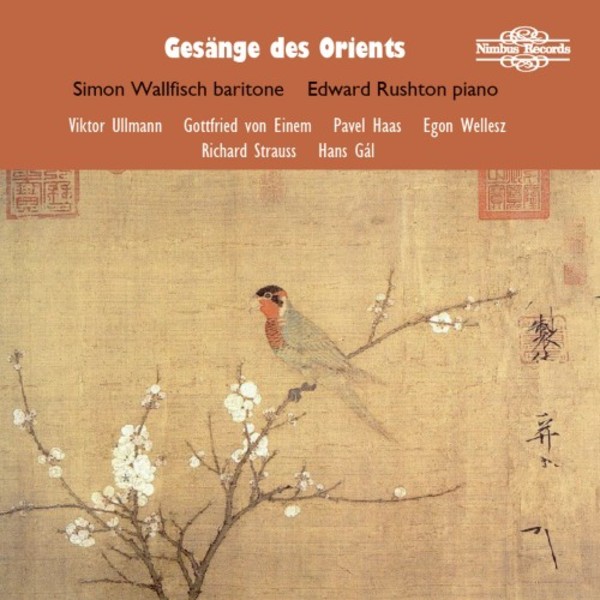 One of the central tropes in German poetry from the eighteenth century onwards was its sustained fascination with all things connected to the Orient. The lure of the mythical and exotic East, vaguely allied to different countries and regions that were geographically far removed from Central Europe, cast an almost transcendental spell over generations of important writers. By the 1830s Oriental Studies flourished in several German universities and a number of prominent academics were engaged upon translating into German vast swathes of poetry from the East. Orientalism also increasingly caught the popular imagination through clothes, décor and furnishings. By the end of the nineteenth century, however, preoccupations with the exotic noticeably shifted eastwards from Germany to Austria. Given the febrile artistic climate in the turn-of-the-century Vienna, it is hardly surprising that composers living and working there also succumbed to the fashion for Orientalism.
 Erik Levi
Suppressed music (or Entartete Musik or Verfemte Musik), music and musicians smeared by the Nazis dark, ideologically-motivated hatred, has developed into an artificial genre of its own, throwing together composers of completely different musical backgrounds and, it must be said, varying degrees of quality, into the same bucket. This must change. We risk missing the true qualities, nuances and pedigree of individual composers voices, as well as the cultural preoccupations that united them (as in the case of this CD, the common fascination in the early twentieth century with translations of Chinese and Persian poetry). The deliberate inclusion of Richard Strauss (whose political allegiances are questionable), is because I wish the listener to hear beyond the names, beyond the painful historical facts and savour the incredible sound world created by these musical cousins.

It is my wish that, by presenting all of these neglected composers as equals, we can begin to restore them to their rightful place, where they belonged all along, in our collective musical Consciousness.
 Simon Wallfisch

Towards the end of the 19th century, a German fascination with Oriental culture had spread to the creatively febrile atmosphere of Austria, and in particular its capital, Vienna. While the most celebrated 19th-century example was undoubtedly Goethes cycle of lyric poems entitled West-Eastern Divan, in turn-of-the-century Vienna it was the poet Hans Bethges collection of translations The Chinese Flute of 1907 that really set the ball rolling, most famously providing the texts for Mahlers Das Lied von der Erde. Other composers responded readily and fruitfully to the new availability of translated Persian, Indian and Chinese poetry, among them Schoenberg, Webern and Zemlinsky, but also the composers represented on this fascinating new disc from baritone Simon Wallfisch. Among them are the Czech composers Viktor Ullmann and Pavel Haas, whose lives were brutally ended in the Auschwitz gas chambers; and the Austrians Hans Gál and Egon Wellesz, who left Austria after Hitlers Anschluss and relocated to Britain where they both forged notable academic careers (Wellesz in Oxford, Gál in Edinburgh). Together with their younger contemporary Gottfried von Einem (who remained in Austria but continued composing in a defiantly cosmopolitan style, ran foul of the Gestapo and courageously protected a Jewish fellow musician in Berlin), they might all be easily covered by the umbrella term of Entartete Musik (degenerate music) now routinely used for collections of music once condemned by the Nazi regime.

However Simon Wallfisch, whose own family members experienced the horrors of Auschwitz, eschews such labels in favour of a more intriguingly thematic approach which allows him to include three Bethge settings from the op.77 Gesänge des Orients by Richard Strauss, thus locating all these works within the broader cultural context of which they should rightly be a part. I wish, he writes, to hear beyond the names, beyond the painful historical facts, and savour the incredible sound world created by these musical cousins [...] to restore them to their rightful place, where they belonged all along, in our collective musical consciousness.

With the help of superbly sensitive, evocative and magically detailed piano accompaniments from Edward Rushton, Wallfisch, ever alive to the nuances of the German and Czech texts, triumphantly succeeds. He captures both the fascination with the Orient that fired these composers imaginations, and also that haunting sense of otherness, of unbelonging,  that must have spoken to many of them all too directly. From exuberant drinking songs to intense, lonely epitaphs for lost love, from mysterious sisters to metaphorical nature pictures, doesnt put a foot wrong.

The standout items here are the complete cycles by Ullmann, Haas and the immediately post-war von Einem, all of which mix eastern atmosphere, personal pain and early 20th-century popular culture in a variety beguiling mixtures. Von Einem himself remains best known for his opera Dantons Tod, premiered in Salzburg at the time of the two cycles recorded here, and Wallfischs performances are important additions to the discography, as are his Ullmann and Haas. He makes an excellent case, too, for rarities by Wellesz and Gál, the former exuding Schoenbergian expressionism and serialism, the latter revelling in late-Romantic harmonies that provide a link with the almost operatic opulence of the Strauss songs which, partly thank to the daring harmonies of Huldigung (Adoration), dont sit quite as uneasily among the other works here as you might suppose.

Alongside Wallfischs own intelligently argued personal note, theres an excellent article on the composers and music by Erik Levi, and full English translations of the song texts. The songs themselves are tracked not individually but in groups, which encourages (like the programming itself) a more integrated way of listening to these absorbing works. Outstanding in every respect, and one of the most interesting lieder discs of the year so far.