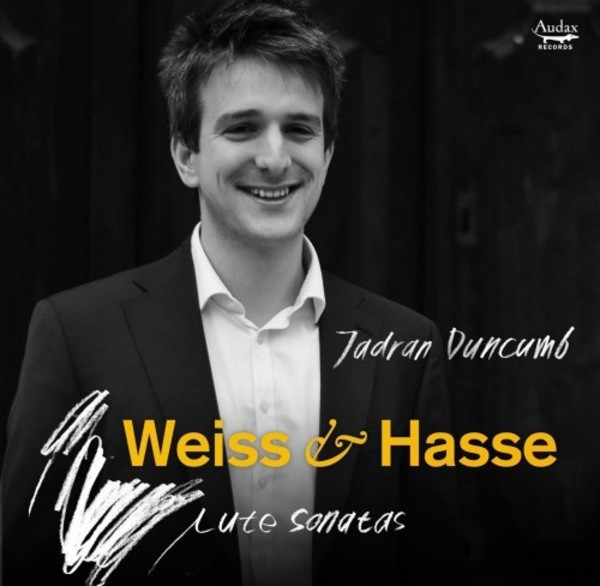 Jadran Duncumb won the String Category of the BBC Young Musician of the Year as a guitar player and went on to study at the Royal College of Music. This recording from the Audax label features the Lute Sonatas from Weiss and Hasse.

Dresdens orchestra in the first half of the 18th century shone above all the other European orchestras, and two of its brightest stars were Silvius Leopold Weiss and Johann Adolph Hasse. Although regarded as highly as Bach, Handel, Telemann and indeed Hasse during his lifetime and in the years after his death, Weisss reputation later suffered due to the fact he dedicated his life to an instrument that soon became obsolete.

Only since the tentative revival of the German baroque-lute in the latter part of the last century has it again been possible to appreciate his genius. This CD combines his astonishing and rarely-played late D minor Sonata with two inventive and unheard Sonatas by Hasse, adapted by an unnamed lutenist and surviving now in a manuscript in Leipzig. Despite being written within a few years of each other by two musicians who worked together regularly and must have been close judging by Weiss naming his son after his colleague, their respective sonatas are very different in style.

Jadran Duncumb not only won the String Category of the BBC Young Musician of the Year but also won first prize at the Maurizio Pratola lute competition in LAquila, Italy. He regularly plays with the Ensemble Diderot.

Echoes of the Grand Canal: Music from Tiepolos Venice