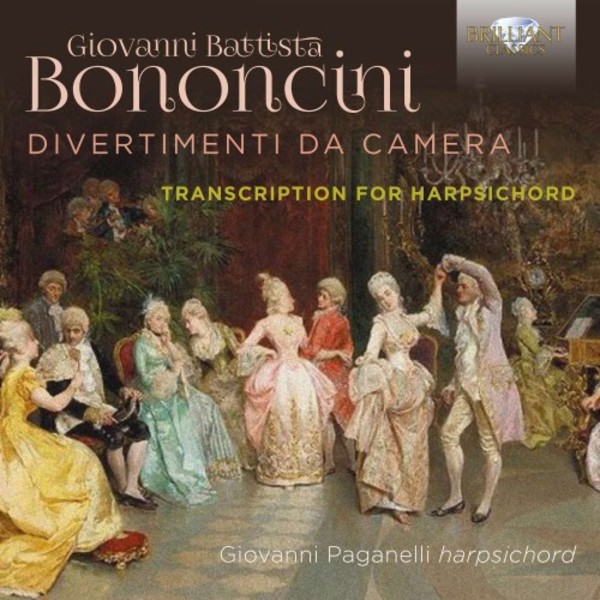 The light and airy chamber-scaled divertimenti on this recording were composed in London in the early 1720s. They must have been among the first works with which Giovanni Bononcini (1670-1747) sought to make an impression on the discerning audiences and business-minded entrepreneurs who, at the time, were instrumental to a music-rich environment that made the city one of the main centres of European culture.

It is perhaps to the detriment of his posthumous reputation that Bononcini became known as Handels direct rival for the favour of Londons musical public: the rivalry between the two men was even immortalised in a piece of satirical doggerel which popularised the English expression Tweedledum and Tweedledee. In fact these divertimenti scored a popular success as soon as they were published; so much so that these harpsichord transcriptions were quickly produced  and then republished two decades later, when they appeared as Suites de Pièces pour le Clavecin, placing them in direct competition with the collection of works under the same name by Handel.

The divertimenti are three- and four-movement works designed not to place any great strain upon the listeners attention: the longest movement here lasts barely three minutes. Even the slow movements are simple arias, originally conceived with a high melody instrument in mind  violin or transverse flute  and conforming to a serene and courtly character. By and large, however, they are filled with lively, dance-like quick movements, cheerful in temperament even when the tonality is minor, as it is in half the divertimenti.

This is the debut album on Brilliant Classics for the harpsichordist Giovanni Paganelli. He is Modenese by birth and training, and continues to put on concerts there within its early-music festival, as well as focusing his research on the citys local composers, but he has also worked extensively in the fields of opera and new music, giving a valuable hinterland to his performances of this effortlessly charming repertoire.