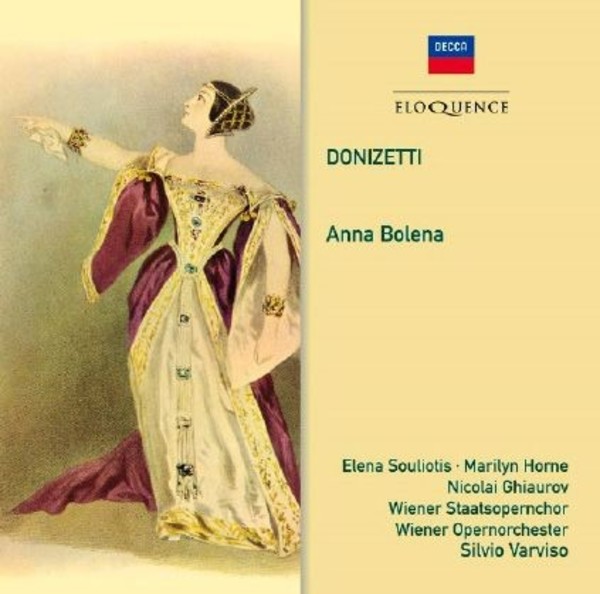 At a time when Donizetti was represented on the worlds stages by little more than Lucia di Lammermoor, and the recording industry was only beginning to capitalise on public hunger for the sublime art of bel canto, this complete recording of the composers first great international success was welcomed as a landmark in the history of the opera.

It had been Maria Callas who gave the piece a triumphant revival at La Scala in 1957, but in a truncated edition which did not do full justice to the full originality of Donizettis voice as he emerged from the imposing example of Bellini. This was the first recording anywhere near complete, doing full justice to the noble scale and scope of the drama and the force and richness of Donizettis imagination.

The heroine for this Vienna-made Decca recording from 1970 was the Greek soprano Elena Souliotis. Everything I cherish in song and singing are embodied in her voice and her musical instincts, remarked the influential editor of Opera magazine, Harold Rosenthal. Her recording career was like a firework, as spectacular as it was brief, and catalogued on The Voice of Elena Souliotis (Decca Eloquence 4805369). Anna Bolena was recorded near the end of her career, and critical praise was lavished upon her colleagues such as the Bulgarian bass Nicolai Ghiaurov as Henry VIII and Marilyn Horne as Giovanna Seymour, Annas maid of honour.

An international cast of high renown, engineered with the customary subtlety and skill of [Deccas] engineers, backed by an excellent orchestra in the knowing control of Silvio Varviso, as effecting a conductor for this work as I can think of. Marilyn Horne offers singing of the utmost succulence and plangency. Nicolai Ghiaurov could not possibly be bettered ... his tone is a constant salve to the ear, a rich, resonant timbre guided by high intelligence. - High Fidelity, December 1970