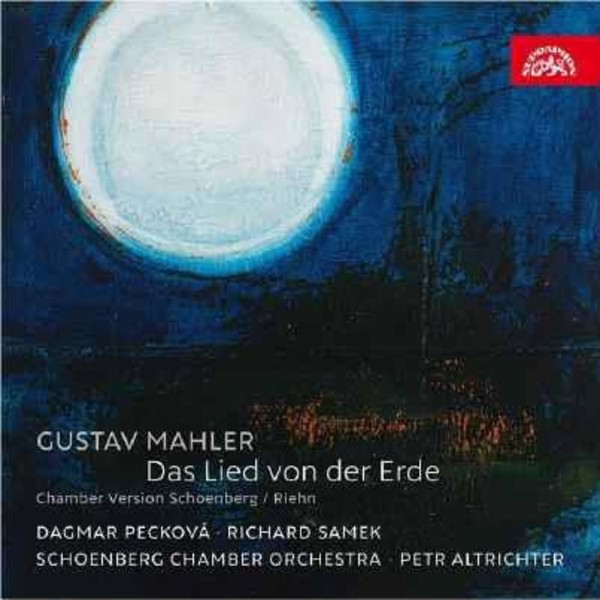 In contrast to Symphony No.8, also known as the Symphony of a Thousand, another of Gustav Mahlers vocal-instrumental pieces, Das Lied von der Erde, speaks in a highly intimate language, full of tenderness and deep sorrow, mirroring the very essence of the artists soul towards the end of his days. The grief, reflecting the painful events in the composers life and expressed in a variety of shades in all the six songs, seems to dissolve at the end of the work in the repeated, atoned forever , a word opening up the infinite space following the life on earth.

The internationally renowned Czech mezzo-soprano Dagmar Pecková has always cherished Mahlers music, as evinced by the highly acclaimed recordings she has made with Jiří Bělohlávek, conducting the Prague Philharmonia. Her partners on the CD is the tenor Richard Samek, whose voice is known to audiences at Europes prominent opera houses, and a chamber ensemble, instead of a large Romantic orchestra, for which Mahler scored the piece. In order to emphasise the works intimacy, Pecková opted for Schoenbergs chamber arrangement of Das Lied von der Erde. The recording has made the soloists dream come true, and thus added the final piece in the mosaic of her feted Mahler discography.

Theres a bright immediacy to everything about this new version from Prague, conducted very capably by Petr Altrichter. Perhaps the focus of the recording is a bit too close at times, but it places the solo voices very much within the web of instrumental lines rather than superimposing them upon it.  Andrew Clements
The Guardian 22 March 2018