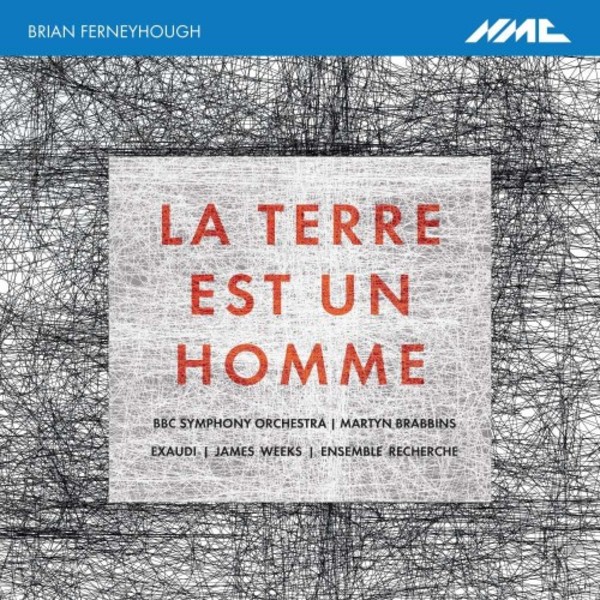 Brian Ferneyhough is widely recognized as one of todays foremost living composers. Since the mid-1970s, when he first gained widespread international recognition, his music has earned him a reputation as one of the most influential creative personalities and significant musical thinkers on the contemporary scene.

The monolithic La Terre est un Homme, with its 4-foot-tall score and written for an orchestra of eighty-eight, each of whom at times becomes a soloist with their own individual stave, caused a scandal at its 1979 premiere and has scarcely been heard since. The title comes from a painting from 1942 by Roberto Matta, which reminded Ferneyhough of a dream he had experienced: I dreamt of a strange and alien planet traversed by a pitilessly hot sun. It was basically a desert landscape. The remarkable thing was, I seemed to be seeing every single grain of sand separately, not only in its spatial dimensions but also  somehow  in its individual weight. All was in slow, ineluctable motion. Between sharply contoured rocks scuttled tiny, scorpion-like creatures. One senses the extreme complexity but inevitability of this strange combination of leaden, slowly-moving sand and sudden flashes of intensely coloured movement.

The second giant orchestral work on this album is Plötzlichkeit which includes three female singers, whose vocalise blends with the orchestra like a modern-day Debussys Sirènes. The BBC Symphony Orchestra under conductor Martyn Brabbins direction throw themselves fearlessly into this demanding and densely notated music.

Brian Ferneyhough was just 26 when he composed Missa Brevis. Written for 12 voices and divided into three four-part choirs, it is superbly performed on this album by EXAUDI. The most recent work is Liber Scintillarum, commissioned by ensemble recherche and premiered at Darmstadt in 2012.

... the BBC Symphony Orchestras revival of La Terre Est Un Homme in 2011 went a long way to redressing the balance. A recording of that outstanding performance, conducted with astonishing lucidity by Martyn Brabbins, dominates this NMC disc, confirming La Terre as one of the most remarkable orchestral achievements of the last half-century. ... With Exaudis exemplary performance of the early Missa Brevis included, too, it all adds up to an exceptionally rewarding collection.  Andrew Clements
The Guardian 9 March 2018

La terre est un homme (1979) remains best known for the controversy around its early performances  but, for all its overt complexity, this is music whose utopian outlook incites players and listeners to experience being on the edge of a musical trajectory whose panache is as evident as its pathos. ... In the latter pieces the BBC SO never shirk that lightness of touch which makes listening a pleasure, while Martyn Brabbins directs with calm authority and, above all, a belief in this musics potency. Ferneyhoughs 75th birthday could not have been more fittingly marked.  Richard Whitehouse
Gramophone May 2018

John Woolrich - The Ghost in the Machine