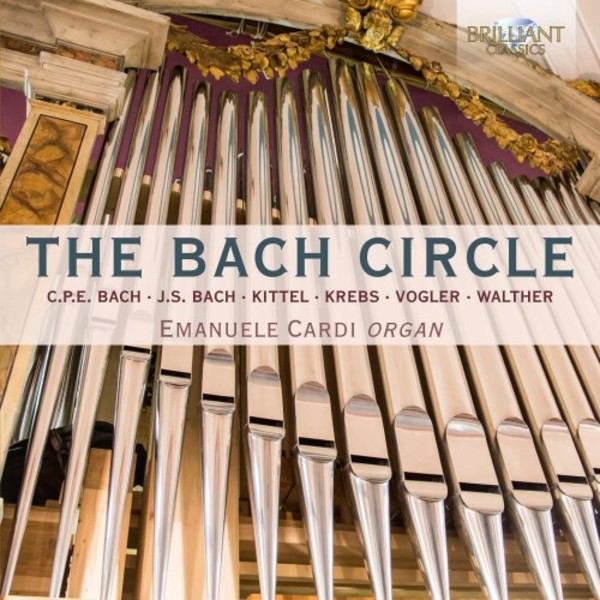 This is Emanuele Cardis fourth album for Brilliant Classics after recordings which display this talented organists wide musical sympathies and talents, ranging from music by Bachs contemporary Tunder (94901) to still more obscure delights from Naples (94622) and exuberant arrangements of Tchaikovsky and Saint‐Saëns for organ four-hands (94881).

He is a great connoisseur of Baroque repertoire, noted the Spanish magazine Codalario of Cardis Neapolitan disc, and it shows in his ability to give these pieces such native colour: this is a remarkable album. On this occasion he has recorded an album which concludes with Bachs most famous yet possibly most spurious work for organ, the Toccata and Fugue in D minor, whose Italianate flourishes surely have their origin in a work for violin, whether or not by Bach himself.

In fact an aesthetic conversation between Italy and Germany underlies the character of the album as a whole. Kittel, Krebs and Vogler were pupils of J.S. in Leipzig, and their work featured here is indebted to a greater or lesser extent to the example of their master; whereas his most talented son, C.P.E., struck out boldly in new directions of harmony and voicing, as demonstrated here by a C minor Fantasy and Fugue and the substantial A minor Sonata.

The cousin of Pachelbel, Walther, like Bach, made many transcriptions for organ of concertos by Vivaldi and his contemporaries such as Corelli and Torelli. Walthers own concerto is a scintillating piece of dancing counterpoint in that tradition, marking quite a contrast to the chorale‐based music of Bachs pupils in the first half of the disc.

The booklet features an essay giving invaluable historical context as well as both photographs and full specifications of the organ by Giorgio Carli in the Church of San Martino in Cimego where the recording was made.