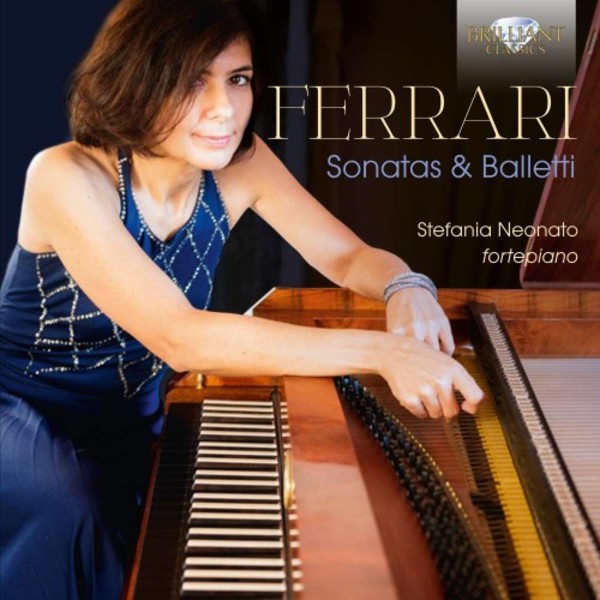 The keyboard works of Giacomo Gotifredo Ferrari (1763‐1842) represent a synthesis of the styles circulating around Europe (not excluding the UK) at the turn of the 19th century. The sonatas on this album, from his Opp. 9, 10 and 12 collections, reveal both his admiration for Mozart and his own tendencies towards Classicism, in dialogue with the French galant style, with the melodic traits of the Italian operatic style, and with the virtuosic formulae of the innovative piano music associated with Muzio Clementi. The six Balletti are more modest in scale and probably intended for domestic use by amateurs. On the other hand, the Caprice Op.8 undoubtedly addresses the power and dynamic range of the new piano, with an innovative, unresolved conclusion on the dominant.

Born in the Trento region of Italy, Ferrari studied music in Verona and could play the flute, oboe, violin, viola and double bass by the age of twenty. He became friends with both Paisiello and Thomas Attwood, the friend and contemporary of Mozart, whose quartets dedicated to Haydn made a deep impact on the young Ferrari. Having written operas in Naples, in 1792 he moved to London, where he met Haydn and Clementi and quickly became a leading singing teacher, with the Princess of Wales among his pupils. It was there that he achieved his most lasting professional success. He wrote a pair of piano concertos, and about 50 sonatas.

The instrument used in this recording is a replica of a five‐and‐a‐half octave 1804 Walter und Soehne fortepiano, built by Paul McNulty in 2008. Like Ferrari, Stefania Neonato hails from the Trento region; she is now professor of fortepiano at the Musikhochschule in Stuttgart, and her activities in teaching, performance and recording are concentrated on Classical‐era music for fortepiano.