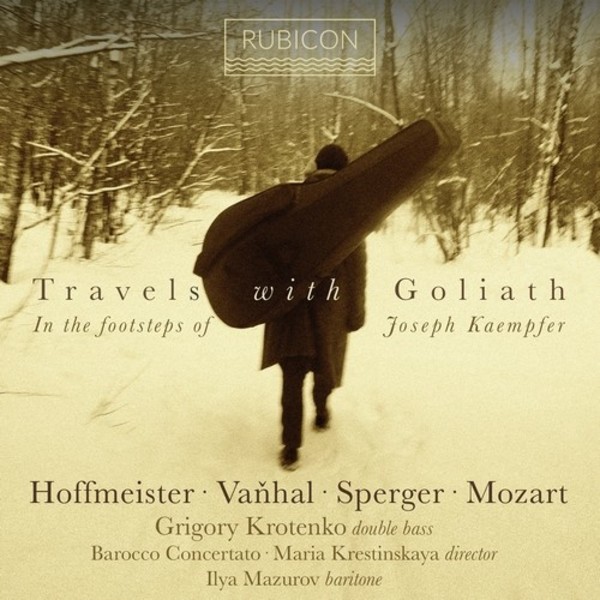 Travels with Goliath: In the Footsteps of Josef Kampfer

Sonata for contrabasso and viola d'amore

Sonata for contrabasso and viola d'amore

Josef Kämpfer (173588?), a cavalry officer in the Hungarian army, self-taught double bass virtuoso and double bass designer led a peripatetic life, moving through musical circles at the highest levels in Austria, Germany, Paris, London and St Petersburg. On his travels he met Leopold Mozart, the Haydn brothers, Vanhal, and many of the most famous musicians of the day. His specially-made and extra-large instrument, to his own specifications, was known as Goliath and astonished audiences wherever he performed. Goliath could be dismantled by a system of 26 bolts and packed into a case for easy transport  one of Kämpfers innovations. A colourful personality, Kämpfers story is well worth getting to know and makes for easy company as this recording admirably demonstrates. His star burned brightly but mysteriously: Kämpfer, his compositions and Goliath vanish from the musical scene as quickly as they had burst upon it. After his successful Paris recitals in 1787 he is not heard of again. It is thought he ended his days as an Imperial Court musician at the Theatre Bolshoi in St Petersburg.

This fascinating and somewhat shadowy figure from the 18th century musical world is brought to life by Russian double bassist Grigory Krotenko on this skilfully curated album featuring music by publisher and composer Hoffmeister, double bass virtuoso Sperger, Haydn and Mozarts friend and fellow composer Vanhal, and last but by no means least Mozart himself  his delightful concert aria Per Questa bella mano for baritone, double bass and orchestra.