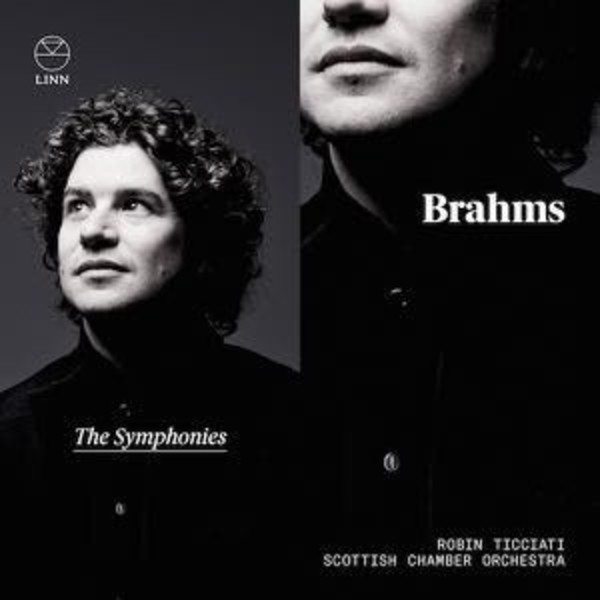 As Robin Ticciati enters his final season with the Scottish Chamber Orchestra, Linn celebrates his memorable tenure as Principal Conductor with a recording of four of the most sublime orchestral masterpieces ever written.

The recording legacy of these revolutionary and distinctive works serves to underscore the confidence Ticciati has, not only in his own vision for these symphonies, but also in his partnership with the SCO musicians, who relish Brahmss highly virtuosic orchestral writing.

The SCOs renowned recordings of Mozart symphonies are a natural predecessor to Brahms, who advances the forms classicism into the Romantic era.

Ahead of the SCO 2015/16 season, in which all four symphonies were performed, Ticciati set out his aims: The challengeis to find a Brahms sound with the orchestra. To find something so unbelievably dark, autumnal, and yet steeped in counterpoint.

By 2017, that Brahms sound was perfected; Ticciatis interpretations are both muscular and energized, with detail and life in every line. Ticciatis meticulous control of tempo, phrase shape and balance results in performances of extraordinary transparency and colour.

At the beginning of the 2017/18 season Robin Ticciati assumed his new position as Music Director of the Deutsches Symphonie-Orchester Berlin, a post he holds in addition to his role as Music Director of Glyndebourne Festival Opera. He was recently appointed Sir Colin Davis Fellow of Conducting by the Royal Academy of Music.

the inner orchestral clarity was outstandingthe entire woodwind section bubbled and fizzed in a way that you would never normally associate with the Brahms sound of a full symphony orchestra.  The Arts Desk

Ticciati wrought a compelling reading of sustained intensity; as ever, his tempo-setting and his phrasing were immaculate.  Musical Criticism

played with stunning responsiveness by an SCO in mind-bendingly innovatory modean altogether-fresh approach to one of classical musics most familiar and taken-for-granted evergreens.  The Herald

As a parting gift in his last season as the Scottish Chamber Orchestras principal conductor, Robin Ticciati has set down one of the cornerstones of the repertoire: the four symphonies of Johannes Brahms. These are works the orchestra knows well, not least from a series of concerts before these studio-condition recordings in Edinburghs Usher Hall, and it shows in performances that combines youthful vigour with matchless musicianship.

The SCO last recorded these symphonies as part of a benchmark Brahms cycle with their conductor laureate, Sir Charles Mackerras, a full twenty years ago, and the new set builds on his achievement by delivering performances close in scale and sound to those Brahms himself is known to have favoured. Like Mackerras, Ticciati employs a string section of just 34 players (10 first violins, 8 seconds, 6 violas, 6 cellos and 4 double basses), slightly larger than the 30 regularly used by the Meiningen Court Orchestra, with whom Brahms had a particularly special relationship in this music. Trombones are narrow bore, the horns are late 19th-century Viennese, and the hand-tuned timpani have calfskin heads and are played with hard sticks, cutting through the beautifully transparent textures to thrilling effect. Combined with the small string section, this means that theres no need for doublings for the woodwind section  one of the sets many glories  to be fully audible even in the scores busier passages.

Unlike Mackerras and other more recent conductors, Ticciati omits the exposition repeats in the First and Second symphonies (but not the Third), following to the letter the approach of the great Brahms conductor and director of the Meiningen orchestra Fritz Steinbach (1855-1916), whose conducting of these works Brahms greatly admired. It also enables Linn to present the works in chronological order, with Symphonies 1 and 2 on CD1, and 3 and 4 on disc 2, so that the listener can readily savour Brahmss steady growth from the titanic struggle of the First Symphony, through the pastoral landscapes of the Second and the intensely personal Third to the assured reforging of the past in the Fourth.

Antiphonally divided violins are nothing new in Brahms symphony recordings these days, but the SCO players are really on their mettle in those passages   notably in the First and Fourth symphonies  where Brahms exploits this, and it is in these more forthright outer works that Ticciati is arguably at his strongest. (There are few more magical moments in music than the sound of a period Viennese F horn in the Alphorn melody that crowns the slow introduction to the finale of the First Symphony.) Thats not to say that the Second and Third are lesser performances: the SCO players clearly relish their colours and the opportunities for more individual expressivity, and there is much to admire here, not least in glorious, intermezzo-like middle movements of the Third.

Again like Mackerras before him, Ticciati has clearly learnt much from the performance practice of Steinbach, as transmitted by Steinbachs pupil Walter Blume, although he focuses on different details, such as the imprecation to press onwards at the closing cadential passage that ends the exposition and recapitulation of the First Symphonys finale. Other localised instances of elastic tempi, many worked out in collaboration with the SCO players in the course of rehearsals and performances, serve as ample demonstration that Ticciati has embraced the principle of expressive tempo modification and discrete phrasing (with clear articulation between phrase groups) that Brahms is known to have advocated.

Where this set will perhaps divide opinion  and in clear distinction from the Mackerras cycle  is the use of minimal vibrato by the strings, combined with frequent use of portamento: the technique of sliding between certain notes on the string. Both techniques are idiomatic to historically informed Brahms performance, and Ticciati has clearly learned much about the former in particular from the pioneering work of Sir Roger Norrington. This gives a decidedly period feel to these modern-instrument performances, as does the shaping of the timpani pulse at the outset of the First (the hand of Norrington again). Passages like the opening of the Fourth Symphony, where the SCO violins most clearly apply portamento, will certainly prove Marmite moments for many: youll either love them or hate them. Yet its definitely worth taking time to live with these performances, which consolidate the achievements of  Mackerras and Norrington  two of recent musical historys most significant Brahmsians  and combine them with the SCOs superb musicianship and Ticciatis unmistakable imagination and energy, to create a cycle that really is worth celebrating.

... the interpretations communicate freshness, sensitivity, vigour and real dedication to the music. Throughout each work, Ticciati projects strongly defined phrase chracterisation, coupled with a great sense of forward momentum...  Erik Levi (Recording of the Month)
BBC Music Magazine May 2018

Mackerrass recording is reassuringly sonorous, despite the smaller complement of strings; Ticciatis is lean and quite dazzlingly transparent. Listening with score in hand, I marvelled at the conductors meticulous observance of Brahmss markings. Nearly every instruction regarding dynamics, phrasing and articulation is accounted for. ... The woodwinds  inevitably spotlit in such a compact ensemble  are marvellously characterful. Sample any of the slow movements, as their playing is consistently and memorably affectionate in all four. ... Its not the Brahms I grew up hearing but its thoroughly compelling and often downright thrilling. ... Ticciati comes to these symphonies with a veritable flood of fresh ideas. Admittedly, not all are equally convincing, but theres hardly a dull note, either  and that in itself is no small feat in such familiar repertoire.  Andrew Farach-Colton
Gramophone April 2018

For anybody who is open to an alternative view of Brahms this is a highly rewarding set of the symphonies, well played and well recorded. Ticciatis willingness to let the music breathe is his key virtue and it is that which ultimately gives his performances their distinctive character  a living, breathing, younger mans Brahms, ready to win new hearts.  Richard Fairman
Financial Times 9 March 2018

Close attention to phrasings, lithe rhythms and individual instrumental finesse play their part. So does Ticciati's choice of small-bore horns and trombones from the late 19th century, earthier in tone than their modern equivalents. More "period" details arrive with the string players' use of portamento, gently slithering up and down towards selected notes. This might have been an irritating mannerism; to me, it felt natural and organic.  ... Ticciati's team spent two weeks in the Usher Hall, Edinburgh, working in studio conditions  time and care very well spent, for this is a set that sweeps aside recent rivals, brilliantly illuminating Brahms's inner textures and making the familiar new.  Geoff Brown
The Times 23 March 2018

if you want big-boned, rich, bass-heavy Brahms, this isnt going to fit the bill. But think about what you gain: the clarity of texture, the incisive winds, the period small-bore trombones and Viennese horns from the late 19th century that theyre using here. Brighter, lighter sounds balanced against the small string sections.  And I think the Fourth Symphony works particularly well: not just the detail but Ticciatis pacing throughout the entire symphony  Andrew McGregor (Disc of the Week)
Record Review (BBC Radio 3) 24 March 2018

There is nothing here that sounds like bog-standard Brahms, nothing that hasnt been meticulously thought through, barely a bar that doesnt say something. ... What stands out is the sheer range of sound and colour Ticciati has at his disposal  something he uses to ensure that each symphony has its own distinct sound world. ... The playing is unfailingly vivid. The slow movement of No 3 features some ravishing duetting from the SCOs oboe and bassoon; the dramatic moments in the ensuing finale come at you like a fist.  Jessica Duchen (Classical album of the week)
The Guardian 29 March 2018