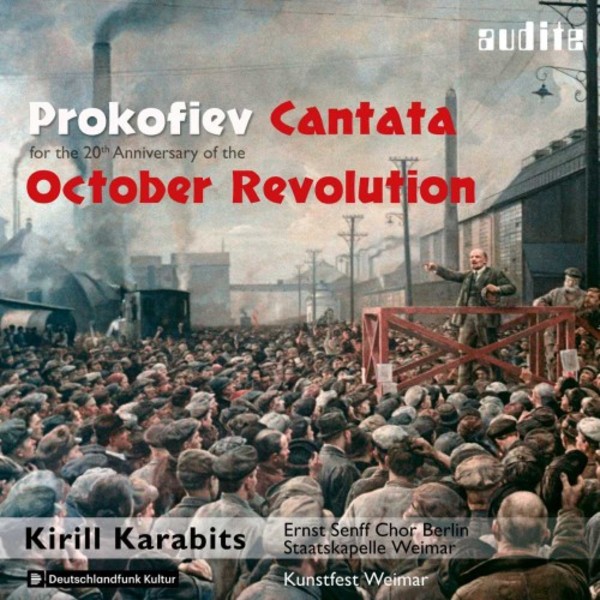 Prokofiev - Cantata for the 20th Anniversary of the October Revolution

Cantata for the 20th Anniversary of the October Revolution, op.74

Cantata for the 20th Anniversary of the October Revolution, op.74

Art at the time of the Great Terror: Prokofievs Cantata for the 20th Anniversary of the October Revolution The twentieth anniversary of the October Revolution made the year 1937 a high point of Soviet culture. At the same time, the Great Terror under Stalin reached its gruesome peak. Prokofiev, who settled permanently in Moscow in 1936, knew which country he had entered. The first position amongst Soviet composers seemed to have been vacated when Shostakovich had become a non-person following the Pravda article Muddle instead of Music. Prokofiev indicated his cooperation: he was determined to become a Soviet composer. In the Cantata for the 20th Anniversary of the October Revolution he played out his genuine enthusiasm for mass scorings, combining colossal symphonic forces with a double choir, a brass band, an accordion ensemble and a gigantic percussion section. The cantata oscillates between revolutionary vehemence and lyrical melodies, between Russian folklore and riotous military tumult.
An exceptional historical document of the highest compositional level  released in the year of the 100th anniversary of the October Revolution. Kirill Karabits, Music Director of the Deutsches Nationaltheater and Staatskapelle Weimar, realises this monumental work with the Staatskapelle Weimar, the Ernst Senff Chor Berlin and members of the Erfurt Air Force Band. Also called into action are a nine-piece percussion section, an accordion quartet, gun shots, alarm sirens etc. whilst the conductor himself uses a megaphone to give a rousing rendition of the texts.

Until 25 years ago, Prokofievs Cantata for the 20th Anniversary of the October Revolution was practically unknown in the West. A 1960s recording by Kirill Kondrashin with Soviet forces was heavily cut, so that it wasnt until Neeme Järvis excellent account on Chandos that Western audiences could finally appreciate the magnificent, bold tableau that was Prokofievs vision. The composer himself never heard the work: its writing coincided with the height of Stalins Great Purge, which decimated not only the ranks of the Communist Party and Red Army, but vast swathes of the population, including the intelligentsia. When Prokofiev submitted the work for consideration as part of the 20th anniversary celebrations of the October Revolution, responses were negative and, in a supreme act of self-censorship, he withdrew the cantata, which must have taken many hours of work and effort simply to write down, let alone conceive.

This new recording by Kirill Karabits and massed forces from Berlin, Weimar and Erfurt  in short, the former East Germany  is particularly welcome, the result of a live performance on 23 August 2017 at the Kunstfest Weimar, as it forms a fascinating pendant to Karabitss outstanding cycle of Prokofievs symphonies with the Bournemouth Symphony Orchestra on the Onyx label. As on those recordings, Karabits here shows himself a natural master of Prokofievs musical language, knowing exactly when to apply drive and grandeur without destroying the musics underlying lyricism.

Part epic, part ode, with the participation of not just a vast orchestra (quadruple wind with eight horns), but an accordion ensemble, brass band and a battery (for once the epithet is entirely apposite) as well as a huge double chorus, this is a work of huge sonic and emotional force. The revolutionary texts, by Marx, Lenin and Stalin, take some swallowing, not least given the atrocities perpetrated by the latter at the time of the Cantatas composition; best not to focus on them too closely, but to sit back and absorb the music itself. And what music it is! From the sinister, primordial rumblings of the Prologue, through the chanting of the Philosophers movement, to the dynamism of the Revolution centrepiece when all hell is let loose, and then on to the quasi-religious Oath and the ultimately uplifting final two sections, this is a work of immense power and engagement, and the combined forces of voices and instruments sing and play their hearts out.

In the purely instrumental movements (sections 1, 3, 5 and 9) the orchestra are marvellous, a tribute to Karabitss phenomenal abilities as an orchestral animateur. Surprisingly inventive sonorities are nurtured and relished, with just enough tartness to the reeds to give a period tanginess to the music. With superb orchestral support, the choral contributions are uniformly excellent, the balance ideal, the sense of commitment palpable. Thankfully the recording is not too close (that might have overwhelmed many a home listener!), but the stereo separation makes the most of antiphonal play between the choirs various sections. The entries of the alarm tocsin, accordion band and siren in the Revolution movement are as effective coups de théâtre as Prokofiev surely intended, folk inflections are brilliantly realised, and even Karabits joins in, as the megaphone-amplified voice of Lenin himself (The success of the revolution hangs on two or three days! Let all perish, but do not let the enemy pass!).

Theres no coupling, but in music of this immersiveness its hardly needed, especially when the performance itself is so involving and rewarding. The accompanying booklet includes the sensibly transliterated full Russian text, alongside English and German translations, and theres a very nice cover which perfectly captures the tone of the work. No hint of irony à la Shostakovich, but a perfect understanding of the patriotic cantata genre and the historic significance of the work itself and the circumstances of its composition. Definitely not for the fainthearted, but an absolute must for anyone who followed Karabitss Prokofiev cycle on Onyx. The Audite team have done the performers proud, and this is a chance to savour what must have been a spine-tinglingly memorable live performance.

At the live event from which the present recording derives, Karabits himself swivelled round to do the honours [as the voice of Lenin], baton in one hand, megaphone in the other. ... Set against the familiar Chandos oprion, Karabits drives noticeably faster in those movements which include a text. ... The results are undeniably exciting... the recorded sound wonderfully clear...  David Gutman
Gramophone January 2018