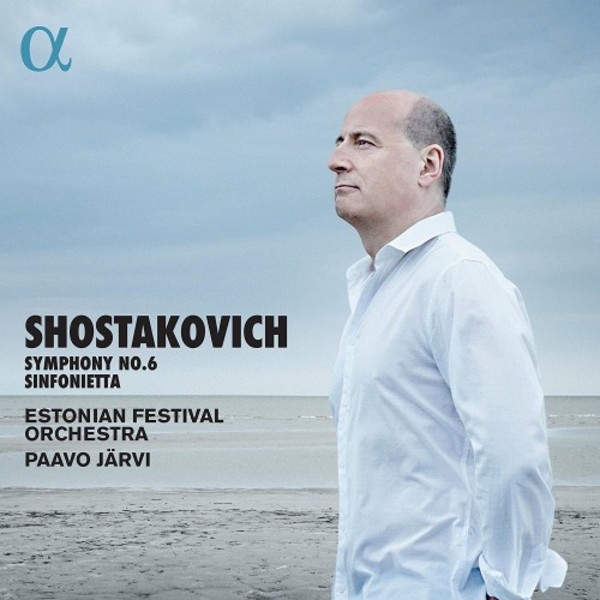 The Järvi family is a pillar of Estonian musical life. Paavo Järvi  is now director of the Pärnu Festival, held in August each year, which brings together the finest Estonian musicians, joined by the cream of European orchestras: members of the Deutsche Kammerphilharmonie, the Berliner Philharmoniker, the Orchestre de Paris etc. Paavo Järvi (recently appointed music director of one of the worlds leading formations, the Tonhalle Orchester Zürich) frequents all these instrumentalists regularly, and now works alongside them, unpretentiously, in a warm, collegial manner for a series of highly convivial concerts on the shores of the Baltic: magical and incredibly appealing, says Die Welt. Paavo Järvi has now decided to record with this outstanding orchestra.
For this first release, he has chosen Shostakovich, a key figure of the twentieth century, for both the region and the Järvi family: Paavo used to meet him as a child when the composer came to visit his father Neeme! The programme consists of Symphony no.6 and the Sinfonietta op.110b, a rare arrangement of the String Quartet no.8 by Abram Stasevich for string orchestra and timpani. This first release in 2018 will also coincide with the centenary of the independence of the Estonian Republic and a tour that will take the orchestra to several major European cities.

In February 2018 Estonia marks the centenary of its independence from the late Imperial Russia. The following hundred years were hardly kind to the country: changing hands between Stalins Soviet Union, Hitlers Nazi Germany and back again, it only achieved its present independence in 1991. Pincered, like the other Baltic states between German dominance to the west and Russian dominance to the east, these influences have naturally rubbed off on its cultural landscape, even while it has retained its own local distinctiveness.

This new release from Paavo Järvi and his Estonian Festival Orchestra, founded in 2011 as part of the annual Pärnu Music Festival, reflects both the countrys newly restored national pride and the historical influences that have shaped it. The orchestra itself is an inspiring combination of young Estonian musicians and professional players from such august ensembles as the Deutsche Kammerphilharmonie, Berliner Philharmoniker and Orchestre de Paris. It combines youthful exuberance with professional polish, while the repertoire on this, its first commercial disc, recalls the days when Shostakovich himself would holiday in Pärnu (theres even a delightful photo of him with Neeme Järvi and the young Paavo). These personal ties have obviously borne fruit in Paavo Järvis deep affinity for Shostakovichs music, and it shows in these exceptionally fine performances of the Sixth Symphony and the Sinfonietta (the latter a 1961 arrangement for timpani and strings of the Eighth String Quartet).

Sandwiched Cinderella-like between the powerful Fifth Symphony and the mighty Seventh, the Sixth Symphony (composed in 1939) has nevertheless been fortunate on disc, with the catalogue boasting vintage recordings by the likes of Stokowski, Boult, Kondrashin and Mravinsky. This new account from Järvi can take its place as among the very best of modern readings of the work. The Estonian Festival Orchestra boasts a particularly strong string section, with a rich, burnished tone, plenty of depth and a wide dynamic capability. These all come into play in the intensely felt opening Largo of the three-movement Symphony, broadly conceived but never losing sight of the longer line. Theres also some excellent wind playing, with pungent tuttis and a heart-stopping flute solo at the point, some eleven minutes in, when time itself seems to stand still. Järvi makes the most of the stark contrast between this hugely personal first movement and the two scherzo-like movements that follow, yet without over-forcing the cynicism. The Allegro second movement has a lightness to it that brings welcome rays of sunshine, woodwind textures finely delineated, brass jubilant and percussion contributions exceptionally alert. In the concluding madcap Presto, Järvi eschews bitterness for a more equivocal Mahlerian burlesquerie, with thrilling results. Somehow, he manages to reconcile the Symphonys contrasts (regarded as problematic by many critics) in a performance that is genuinely engaging and, ultimately, affirmative.

Recorded in July 2017, a year after the Sixth Symphony, the Sinfonietta is an arrangement by Shostakovichs friend Abram Stasevich that was made with the composers blessing. Here the EFO strings play their collective heart out in music with deep autobiographical resonances. In the painfully intense slow outer movements, theres a sonorous depth, an emotional and dynamic gamut that would be impossible to capture by even the very finest string quartets. The addition of timpani is an inspired idea, and the EFOs principal is on particularly blistering form in the tumultuous Allegro molto second movement, with knife-edge iterations of the composers D-S-C-H signature motif and wild dynamic contrasts. The performance as a whole culminates in a closing Largo of utter desolation, Järvi and his players alive to every emotional inflection of the music. Even for purists, this is as powerful a performance of this work as you are likely to hear, and it crowns a stunning debut from this vibrant young orchestra, with recording and presentation to match.

The playing is deliciously fresh and alive
The Scotsman January 2018

Paavo Järvi comes much closer than other conductors to encapsulating the lightness of mood and texture which Shostakovich apparently desired in [the Sixth Symphony]. ... To assume however that Järvi glosses over the more forebidding subtext of the Symphony would be misleading. Theres lots of weight in the big climaxes of the Largo, and the orchestra unleashes a ferocious salvo of sound in the raucous middle section of the scherzo... If anything, Abram Stasevichs imaginative arrangement of the Eighth Quartet for string orchestra and timpani is even more engaging, especially in such a brilliant and emotionally compelling performance.  Erik Levi
BBC Music Magazine April 2018