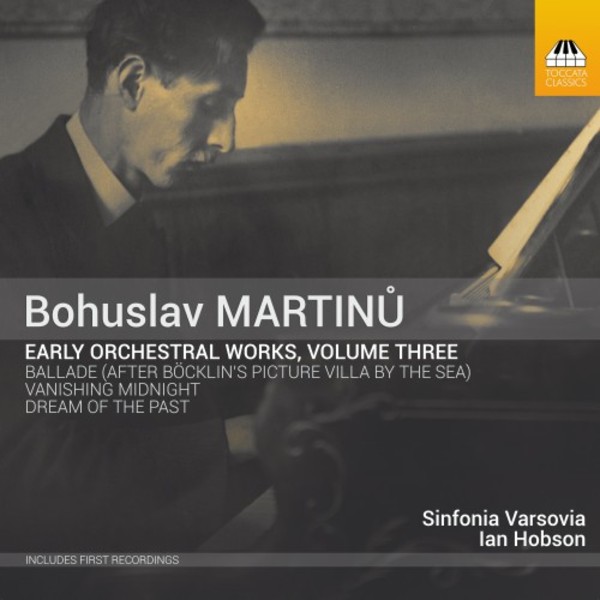 Ballade: Villa by the Sea
Dream of the Past
Vanishing Midnight

Ballade: Villa by the Sea
Dream of the Past
Vanishing Midnight

This series of first-ever recordings of Martinůs early orchestral works has already uncovered much delightful music; this third release moves everything up a gear. The symphonic triptych Vanishing Midnight (1922) will prove a revelation: a big-hearted work of breathtaking opulence and striking confidence. Vanishing Midnight is as exquisitely lovely as it is powerful and dramatic  Martinůs first true masterpiece, but it is also his last full-on engagement with Impressionism. The two shorter works here  Ballade: Villa by the Sea and Dream of the Past  are colourful and atmospheric tone-poems, pieces of real substance and major discoveries in their own right.

Ian Hobson, pianist and conductor, began his international career in 1981 when he won the Leeds International Piano Competition. He is in increasing demand as a conductor, particularly for performances in which he doubles as a pianist. He made his debut in this capacity in 1996 with the Stuttgart Chamber Orchestra, and also performs extensively as pianist-conductor with Sinfonia da Camera, a group he formed in 1984 and which quickly gained international recognition through its recordings. This is the fifteenth album that Ian Hobson has recorded for Toccata Classics as either pianist or conductor; more albums in both capacities are under discussion, not least further recordings in his pathbreaking series of the early orchestral music of Bohuslav Martinů. He is also the pianist in the recording of the complete music of Wilhelm Heinrich Ernst, featuring the violinist Sherban Lupu, Hobsons erstwhile colleague at Indiana University.