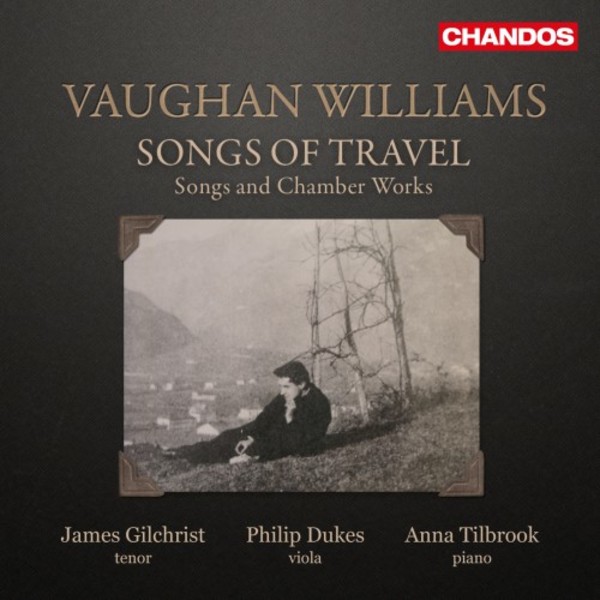 Hymns (4) for tenor, viola obbligato and piano
Orpheus with his lute
Rhosymedre (arr. Richard Morrison)
Romance for viola and piano
Silent Noon
Songs of Travel (9)
Studies in English Folksong (6)
The Winter's Willow
The sky above the roof

Hymns (4) for tenor, viola obbligato and piano
Orpheus with his lute
Rhosymedre (arr. Richard Morrison)
Romance for viola and piano
Silent Noon
Songs of Travel (9)
Studies in English Folksong (6)
The Winter's Willow
The sky above the roof

Having previously recorded British repertoire on Chandos, James Gilchrist joins the pianist Anna Tilbrook nine years after their previous recording, in a lyrical journey through some of Vaughan Williamss best songs and rarely heard chamber works. They are joined by Philip Dukes, Great Britains most outstanding viola player, according to The Times.

This album captures the composers love for both the voice and the viola, bringing together five works for tenor and piano, two for tenor, viola, and piano, and two works for viola and piano alone. Central to the recording is the fresh, invigorating, and at times reflective cycle Songs of Travel, composed between 1901 and 1904, of special interest is also an arrangement of Rhosymedre by the chief music critic of The Times, Richard Morrison, recorded here for the first time and performed by the same forces who gave the premiere of the arrangement in St Johns Smith Square in 2016, to critical acclaim.

The art of song lies at the heart of Vaughan Williamss music: folk, sacred and art song all played a crucial role in the development of his personal musical voice. This new disc of the composers early songs, a welcome addition to Chandoss ever-expanding catalogue of RVWs output, brings into focus works for tenor and for viola - both of which inhabit a musical register for which the composer had a particular aptitude.

The main work here is the Songs of Travel, nine settings of poems from the eponymous Robert Louis Stevenson collection of 1896, composed in 1901-04 when Vaughan Williams was in his early 30s. Though tinged with melancholy and nostalgia, these are essentially youthful works, whose mixture of passion and reflection makes them constantly rewarding. Usually they are performed in the original setting for lower voice (alto or baritone), but here tenor James Gilchrist makes a powerful case for the higher voice version, which seems to add an extra level of intensity and ardour. Gilchrist brings not just vast experience but also a wide range of dynamic and tonal shading to these songs, as well as an unfailing feel for their tender lyricism. And he is superbly partnered by pianist Anna Tilbrook (with whom he has worked for over twenty years): her playing is an ideal combination of sensitive support and evocative colour - just listen to the gloriously shimmering opening of Let Beauty awake, or the effervescence of The Roadside Fire.

At the other end of the disc stand the Four Hymns for tenor, viola and voice of 1912-14, meditative reflections on symbolic hymn texts in which tenor and viola stand in complementary relationship and combine with the piano to create some magical textures. Culminating in the splendid bell-like ostinatos of the Evening Hymn (O gladsome Light), these performances capture a sense of ecstatic spiritual wonder, with seasoned viola virtuoso Philip Dukes bringing his own richly-timbred textures to the Gilchrist-Tilbrook partnership.

Dukes gets his own spot in the limelight with the epigrammatic Six Studies in English Folk Song (1926), but also in the rather more expansive, impassioned Romance: probably composed for Lionel Tertis in the mid-1930s, it is the latest music on the disc, and bears all the hallmarks of Vaughan Williamss maturity. Dukes and Tilbrook are ideal champions in a performance full of colour and passion which punches well above its weight in terms of expressive power.

Gilchrist and Tilbrook offer four further individual song settings: Orpheus with his Lute (1902), Silent Noon (1903), The Winters Willow (1903) and The Sky above the Roof (1908), the last being an unusually rewarding and effective Verlaine translation which seems to benefit from Vaughan Williamss recent studies with Ravel in Paris. All are performed with exquisite sensitivity and an unerring feel for the idiom. Finally, acting as a prelude to the Four Hymns, Gilchrist, Dukes and Tilbrook combine forces for a recent arrangement by Richard Morrison of the second of RVWs Three Preludes founded on Welsh Hymn-tunes (1920). In Morrisons arrangement, Rhosymedre has a surprisingly contemporary feel to it, with a gentle but definite swing to its step. As with all the works on this absorbing disc, it benefits enormously from the supreme but unassuming musicianship of the three performers.

The recording, from Potton Hall in Suffolk, is of Chandoss usual high standard, and the generous documentation includes commentary and full texts. For lovers of British music and the art of song, this can be enthusiastically recommended.

Viola player Philip Dukes and pianist Anna Tilbrook make a lovely thing of the Six Studies in English Folksong ... and they generate a comparably stylish, keenly communicative rapport in the ravishing Romance found among the composers papers after his death... The delights continue as the tenor James Gilchrist joins his colleagues for urgently expressive renderings of both the wondrous Four Hymns... Elsewhere, Gilchrist and Tilbrook draw upon the reserves of experience that come with two decades of performing together to lend delectably wise advocacy to the Songs of Travel.  Andrew Achenbach
Gramophone February 2018