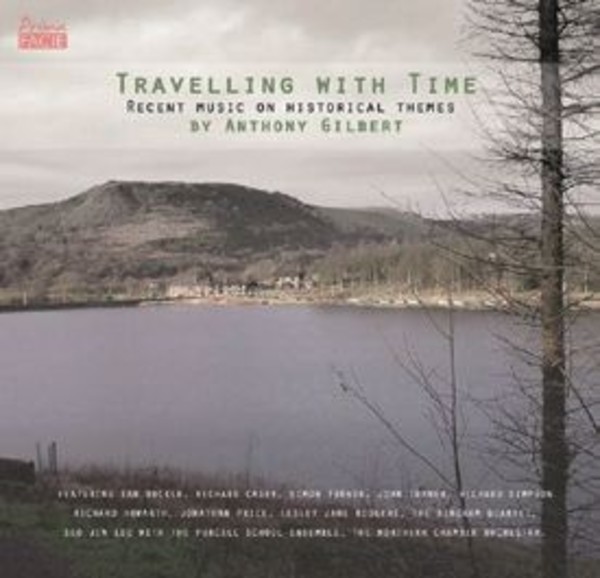 Travelling with Time is a sequence of seven compositions by Anthony Gilbert (b. 1934). The disc includes two premiere recordings and features performances by Seo Jin Lee, Simon Turner, Richard Casey, Lesley Jane Rogers, and the Bingham Quartet, amongst others.

So rich in imagination; there are such delicate, sensitive and exquisite moments - Brian Wright, composer and lutenist

The compositions on the album all parallel, in their different ways, conflicts and near-resolutions in European history from the Nordic invasions across to our recent waves of persecution and instability. Gilbert himself grew up in a family who were forced to flee from religious persecution in the late 1930s. The texts for Ygg-drasill (2007), set for voice and nine instruments, tell of a Viking invasion, and the first text is attributed to King Alfred. Another Dream Carousel reflects on the Nazi persecution of the Jews in Vienna before Kristallnacht (1938), and on how the Jews were able to sustain their morale in the face of these horrors. Juxtaposing these, Rapprochement (2011) for cello and piano explores conflict resolution, and String Quartet No.3: super Hoqueto David (1987) draws upon a Hebrew chant used by Perotin (1160-1230) and Machaut (1300-77), and strives to capture the sounds of the hurdy-gurdy. In contrast, inspiration for the solo piano works comes from wildlife: butterflies (Papillon Postcards (2005)) and birds (Piano Sonata No.3 (2001)). The two songs for soprano, recorder, oboe, violin and cello, En Bateau, daprés Watteau (2007), are settings of Baudelaire (1821-1867) and Proust (1871-1922) respectively, loosely connected by the theme of the sea.

The ordering of the seven compositions on this CD aims to show, figuratively rather than literally, how early historical patterns of conflict and nearresolution in an otherwise peaceful context are mirrored in our own time. Two sets of three pieces are separated by a substantial Sonata (which acts as time-transition) creating an overall triptych-like structure for the disc.