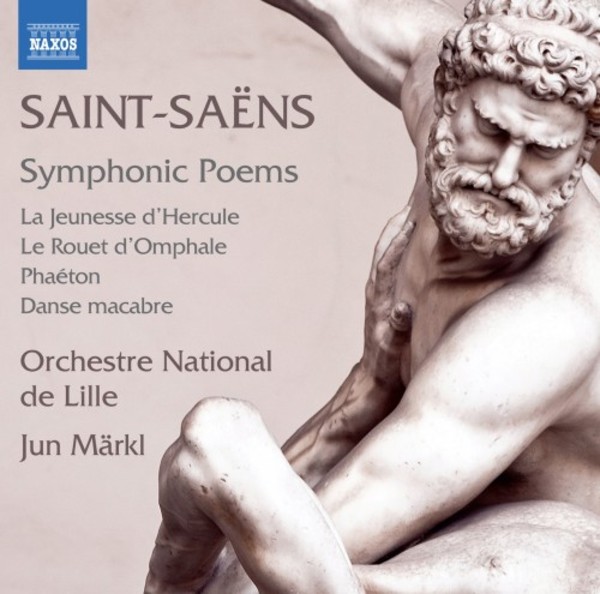 Though Berlioz and, to a lesser extent, Franck wrote symphonic poems, it is Saint-Saëns who has been largely credited with introducing the genre to France. A wide orchestral palette and stirring reserves of drama are used to evoke the youthful audacity and death of Phaéton, the ultimate triumph of virtue over pleasure in La Jeunesse dHercule (The Youth of Hercules), and Hercules punishment, spinning wool while dressed as a woman, for the inadvertent murder of one of his guests, in Le Rouet dOmphale (The Spinning Wheel of Omphale). The ever-popular Danse macabre is a spooky depiction of Death playing a dance on his fiddle on a tomb in a graveyard surrounded by skeletal dancers.

Conductor Jun Märkl specialises in twentieth-century French music for Naxos and has earned international plaudits for his multi-volume Debussy series as well as for his Ravel and Messiaen discs.

Of the final Debussy volume (Volume 8 on 8.572584) MusicWeb International wrote: The orchestral playing is exemplary and the sonics are first rate. Theres just enough resonance to deliver a true Debussian sound to the listener but all the inner details can still be clearly heard. Both conductor and orchestra were in splendid form during this session.

With the obvious exception of the perennially popular Danse macabre, recordings of Saint-Saëns's four symphonic poems are still rare enough for any new collection to be wholeheartedly welcomed. Charles Dutoits 1979 accounts with the Philharmonia Orchestra on Decca had the field to themselves until Neeme Järvis 2011 recording with the Royal Scottish National Orchestra came along on Chandos. But theres still room for a good digital recording in the mid-price range, and Naxoss new disc with the admirable Orchestre national de Lille under its former music director, Jun Märkl, happily fills this gap. These are earthily exuberant performances, oozing Gallic charm and passion, and helped by a well-focused recording from the auditorium of the Nouveau Siècle, Lille, the orchestras home.

Proceedings get under way with Phaéton (1873), which recounts the tale of the sun god Helioss hapless son who, eager to prove his lineage, is reluctantly given permission by Helios to drive the chariot of the sun. Flying too close to the earth, he is struck down by Zeuss lightning bolt, and is mourned by the river nymphs of the Eridanos. The story is a sort of inversion of the Icarus myth, and it receives a beautifully shaped performance here: the galloping string figuration sets the heart a-racing, while the cantabile horn second subject as the earth hoves into view is marvellously expressive. Theres palpable tension as the menacing growls of the brass herald impending danger, and if the strike of the lightning bolt isnt quite as thrilling as Dutoit, theres an unforced naturalness and musicality to Märkls performance that is characteristic of the disc as a whole and is highly rewarding.

La Jeunesse dHercule (1877) is the last, the most Lisztian and, at fifteen minutes, the longest of Saint-Saënss symphonic poems; it tells of the young Herculess renunciation of pleasure in favour of virtue. Worldly pleasures are vividly conjured up by a lively bacchanale (complete with exotic percussion). Theres an appropriate nobility to this performance, especially when, with a broad gesture from unison strings and wind, Hercules scorns earthly delights, followed immediately by a gentle reprise of the opening music. The work builds to a jubilant climax, with virtue triumphant over pleasure, and Märkl and his orchestra successfully sustain the momentum throughout.

Another Hercules myth is the subject of the better-known Rouet dOmphale (1871). Hercules is punished by Hera for the accidental murder of one of his guests: he is condemned to serve Queen Omphale for three years while disguised as a woman, spinning wool for her at a wheel. The constant spinning motion, Herculess groans of lament and Omphales mocking are all perfectly brought out in this delightful performance, with characterful contributions from woodwind and brass.

The familiar strains of Danse macabre (1874), in which the figure of Death summons the dead from their graves to dance for him on All Hallows Eve, are clearly enjoyed by the orchestra in a splendidly alert reading. Xylophone skeletons rattle their limbs, the strings dig in for extra tone in the second phrase of the main theme on its tutti restatement, and theres some really excellent playing from the diabolical solo violin: its a shame that she or he isnt named by Naxos.

The fillers are excellent too: a rousing performance of the patriotic Marche héroïque (1870), a symbol of resistance  during the siege of Paris, and loving accounts of the faux-Baroque Sarabande and Rigaudon (1892), the first exquisitely phrased and shaped by the strings (again including a particularly fine violin solo), the second highlighting some striking parallels with Stravinskys much later neoclassical Pulcinella (1920).

All in all, this is a joy of a disc, continuing Naxoss valuable wider exploration of Saint-Saëns oeuvre, and a further credit to the Orchestre national de Lille under Märkl following their widely admired Debussy series for the label. At the price, its a highly attractive proposition for those wanting to explore further these unjustly neglected works.

The performances from the Lille orchestra are lissom and deft, and Märkl never attempts to overload his reading with portentousness. The four symphonic poems are interspersed with a suitably rousing Marche Héroïque composed during the siege of Paris in 1870 and, more interestingly, a Sarabande and Rigaudon from the 1890s, which Saint-Saëns wrote for his new edition of Charpentiers comédie-ballet Le Malade Imaginaire. Like everything here, they are immaculately polished miniatures, which do exactly what they are intended to do.  Andrew Clements (Disc of the Week)
The Guardian 6 December 2017