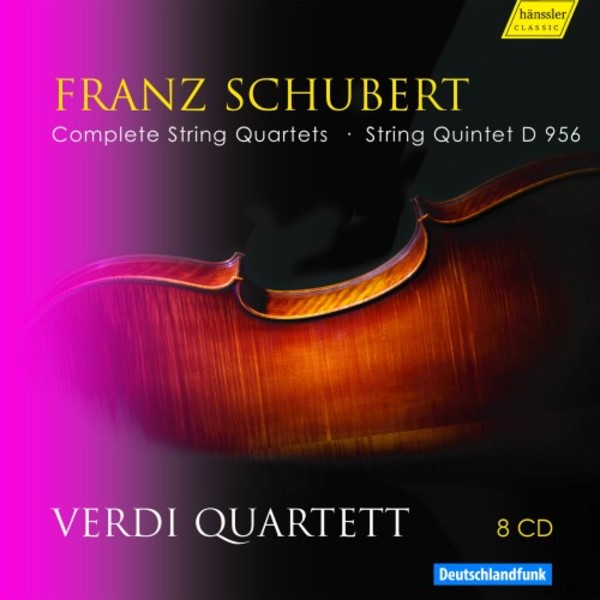 Time and again the four members of the Verdi Quartett have successfully communicated their enthusiasm to their audiences, for instance at the great festivals at Schwetzingen, Ludwigsburg and Zermatt, the Mozart Festival in Lille (France), the Orlando Festival in Kerkrade (Netherlands) and the Bach Festival in Oregon, where they were appointed Quartet in Residence. Their national and international commitments have taken the quartet to virtually all the leading concert venues, not only in Europe but also in the USA, Canada, Africa and South Korea. They have appeared with eminent performers such as Norbert Brainin, Siegmund Nissel and Martin Lovett, Bruno Giuranna, Alfredo Perl, Günter Ludwig, Rudolf Meister and Matthias Kirschnereit. The 'Verdis' have been coached by the Amadeus Quartett, not just in chamber music playing, but also specifically concerning Benjamin Brittens work, who wrote his third and last string quartet for this legendary ensemble, and with whom he collaborated while preparing the world premiere. Such influence, as well as master classes with the Shostakovich Quartet Moskow and Melos Quartett Stuttgart, helped mark the Verdi Quartetts style, which is characterized by great tonal beauty as well as a certain austerity. These influences led to a particular affinity to the works of the great hungarian composers Bartók and Kodály, and to the music of the eminent russian composer Dmitri Shostakovich. All this is in perfect harmony with the four musicians fundamental artistic ideas.