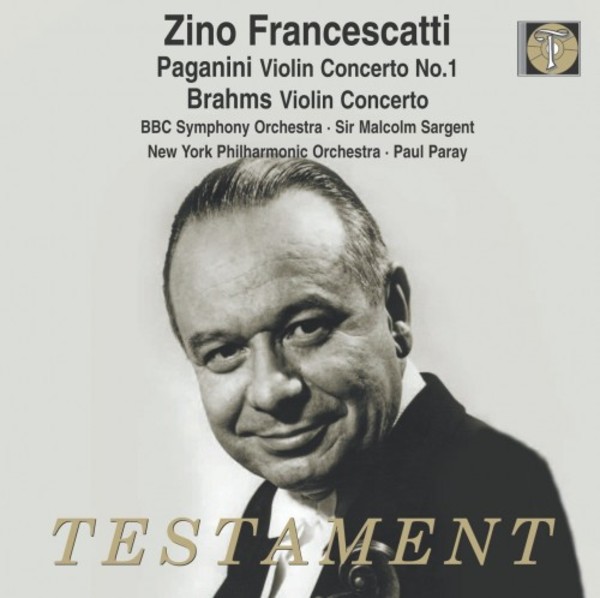 René-Charles Zino Francescatti (1902-1991) was born in Marseilles. Both his parents were violinists and his father, Fortunato Francescatti (1858-1923) an Italian by birth, was a pupil of Camillo Sivori who had been the only student of the great Niccolò Paganini. Fortunato, at the age of forty-two had married his seventeen-year-old pupil and the couple had two sons, Zino being the eldest.

Francescatti made his professional debut in Paris at the Palais Garnier in 1925 playing the Paganini Violin Concerto No.1, a work that would remain in his repertoire throughout his life.

In the 1930s Francescatti toured South America and Europe and it was in 1939 that he made his United States debut with his calling card, the Paganini Concerto No.1, accompanied by the New York Philharmonic and John Barbirolli. The Second World War interrupted his progress, but the late 1940s and 1950s were the peak of his career, and the fact that Arthur Judson of Columbia Artists was his US manager, led to a series of famous LP recordings of the concerto repertoire for American Columbia. On these, he was mainly partnered with the New York Philharmonic and Dmitri Mitropoulos or the Philadelphia Orchestra and Eugene Ormandy, but there were also recordings of Mozart concertos with Bruno Walter, and some stereo discs with Leonard Bernstein.

In August 1951 Francescatti performed Beethovens Violin Concerto at the Edinburgh Festival with Dmitri Mitropoulos and the New York Philharmonic Orchestra and then made his first and only appearance at the Proms playing Paganinis Violin Concerto in D major with Sir Malcolm Sargent. The excitement of the audience is palpable on this early tape recording with extended spontaneous applause after the first movement and the ovations grew and continued at the end for more than four minutes.

In March 1946 Francescatti played the Brahms Violin Concerto in New York with Artur Rodzinski; just over a decade later he performed the work again at Carnegie Hall with his compatriot Paul Paray (1886-1979) who was conductor of the Detroit Symphony Orchestra from 1952 to 1963.

A warm and sunny personality who loved gardening and creating beautiful music, onstage Francescatti was a consummate and serious artist. He worked with all the great orchestras and conductors of the world sustaining a performing career for more than fifty years, retiring in 1976. His music making had a wonderful warmth and humanity rather like that of conductor Bruno Walter and he was a totally natural violinist.
 Jonathan Summers