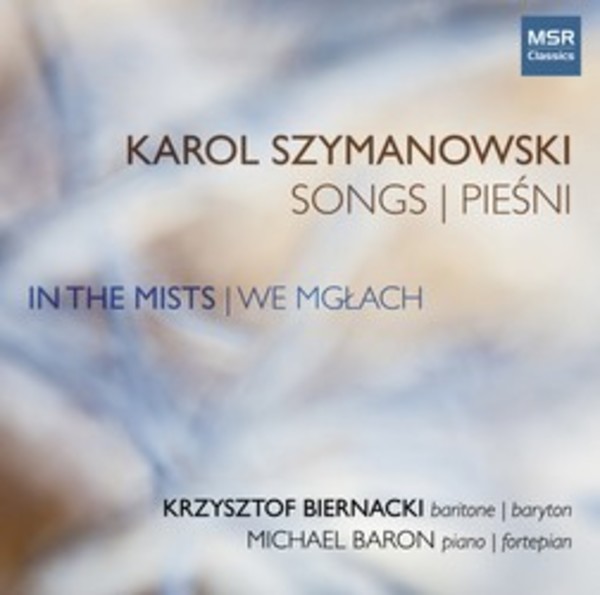 In the Mists: Songs by Szymanowski

The history of the Polish art song parallels the development of the genre in other eastern European countries  one that is marked by influences of neighboring nations while simultaneously exhibiting a unique native voice. Although incomparable to the abundance of songs produced in Germany, Poland did witness a number of song composers even prior to Karol Szymanowski (1882-1937), including the father of Polish song Józef Elsner (1769-1854), his pupil Frédéric Chopin (1810-1849), and the overtly nationalist Stanisław Moniuszko (1819-1872), often referred to as The Polish Schubert. Unlike his predecessors, however, Szymanowski represents a Polish song composer of European importance whose songs are distinctly superior in contrast to the simpler style of earlier composers.

Now regarded as one of Polands most celebrated composers of the early 20th century, Karol Szymanowski belongs to a generation of individuals associated with Young Poland, an informal group of musicians and artists that promoted neo-Romantic and impressionistic ideologies. In the Romantic spirit, Szymanowski (like Schubert) clearly enjoyed a life-long interest in song composition, evidenced by the early Op.2 collection of 1902 through the Op.58 set completed five years before his death. To that end, the songs reflect the composers changes in musical style and aesthetic attitude. In maintaining the zeitgeist of the 19th century, Szymanowskis early songs resemble the compositional processes associated with the Romantic lied; the later songs from his middle and late periods illustrate the composers interest in late 19th-century ideologies, most notably Oriental exoticism and folklore.

Szymanowskis preoccupation with musical settings of poetic texts is evidenced in his correspondences to a poet-friend: I am unable to say anything authoritative about your poetry  since unfortunately I am not an expert in this field. Intuitively, I am able to grasp the deepest value . . . I think that this value is an attainable shortcut between the innermost experience and the mathematical, exact formula of words. As noted by Szymanowski scholar Teresa Chylińska, the composer clearly understood that he would remain a poet of sounds, not of words, perhaps perpetuating a similar appellation  The Poet of the Piano  bestowed upon his Polish predecessor Frédéric Chopin.

The release of this CD not only celebrates the 135th anniversary of the composers birth in present day Tymoszówka, Ukraine, but it also commemorates the 10th anniversary of the Polish Parliaments resolution in naming 2007 as The Year of Szymanowski. The CD is the first collaborative recording between acclaimed Polish-born baritone Krzysztof Biernacki (University of North Florida) and award-winning pianist Michael Baron (Florida Gulf Coast University). Biernackis rich, penetrating, and often dark timbre coupled with Barons brilliant interpretation of Szymanowskis technically demanding piano score beautifully highlight the imagery of the poetic texts. That said, one could only hope that this musical duo will continue to collaborate on future recordings, perhaps fulfilling the old Polish proverb Historia się powtarza  history repeats itself - something that has happened once can happen again.

Baritone Krzysztof Biernacki has established a fine reputation as a versatile singer, and a dedicated proponent of the vocal works of Karol Szymanowski. Born and raised in Poland, Biernackis professional credits include opera, oratorio, concert and recital performances in North America and Europe. As an opera singer, he has appeared in principal roles with Vancouver Opera, Manitoba Opera, Calgary Opera, Orchestra London Canada and Banff Center for Performing Arts. His concert engagements include appearances with Jacksonville Symphony Orchestra, Vancouver Symphony, Calgary Symphony, and Winnipeg Symphony Orchestra. Biernacki is also a frequent recitalist performing standard art song literature including legendary song cycles by Schubert, Schumann, Brahms, Wolf and Beethoven, among many others. Recent European engagements include solo recitals at international music festivals in Italy, Spain, Germany, Poland, Bulgaria, Macedonia, Serbia, France and Norway. Known as a strong proponent of vocal works by Polish composers, Biernacki often performs Szymanowskis art songs and prepares Polish-to-English language transliterations of his compositions using the International Phonetic Alphabet. While working on his doctorate in opera performance at the University of British Columbia, Biernacki authored a performers guide to Karol Szymanowskis opera, King Roger. His performance of the title role of this challenging stage work received critical acclaim. An award-winning university professor, Biernacki holds the position of Gerson Yessin Professor of Music and Director of Opera at the University of North Florida School of Music. His stage directing credits include more than 30 opera productions at UNF and the European Music Academy in the Czech Republic.