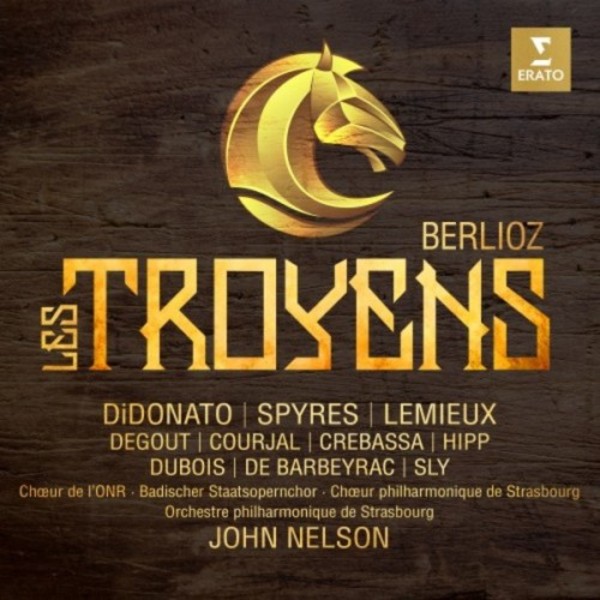 Taken from concert performances in Strasbourg that were described as the musical event of the year, this recording of Berliozs epic Les Troyens presents the score absolutely complete. John Nelson, unrivalled in his authority in this mighty work, conducts a cast led by Marie-Nicole Lemieux as Cassandre, Joyce DiDonato as Didon and Michael Spyres as Énée.

This new Erato recording of the complete, uncut score of Les Troyens is drawn from two concert performances that took place over the Easter weekend in April 2017 in the city of Strasbourg in eastern France. A magnificent cast of singers, predominantly Francophone, assembled under the baton of John Nelson, an acknowledged master of Berliozs music who has conducted Les Troyens more frequently than anyone else over a period of more than 40 years; he made his name with the piece when he led performances at New Yorks Metropolitan Opera in 1974 and enjoyed great acclaim for a production at the Frankfurt Opera shortly before the Strasbourg concerts.

The concert performances of Berliozs Les Troyens conducted by John Nelson in April 2017 at the Salle Érasme, Strasbourg, were billed as the musical event of the year. And for once the marketing hype was spot on. Berlioz never witnessed a complete performance of this, his crowning musical achievement, but although its formidable musical and technical demands mean that it is still a relative rarity in live performance, since its revival in the 20th century it has been fortunate on disc and video. Recordings from Beecham, Colin Davis (two), and videos from Gardiner and Pappano, have variously established themselves as classics, but this astonishing new account on Erato caps them all in musical terms, and has more than enough dramatic tension to compensate for the lack of actual staging.

Nelson is without peer in Les Troyens: since making his New York City debut with an uncut performance of Berliozs score in 1973, it is the work with which he has been most associated, and he made his professional conducting debut at the Met on a days notice, standing in for an indisposed Rafael Kubelík. And shortly before these Strasbourg performances, he conducted a production for Oper Frankfurt with a completely different cast. Nelsons vast experience on the work is evident in every bar: he gets deep into the textures of Berliozs style, idiosyncrasies and all, and the whole is faultlessly paced, with just the right degree of urgency to keep the piece together, and the four-hour span feeling not a moment too long.

Les Troyens vast canvas recounts the story from Virgils Aeneid of the flight of Aeneas and fellow Trojan survivors from the fall of Troy, their fateful stay in Carthage, and their eventual departure for Italy, where Aeneass descendants will eventually found Rome. It shows the effects of nation-building on individuals both high and low, encompassed by the overarching impetus of fate. Similarly, a range of operatic influences, from Rameau and Gluck to Spontini and French grand opera, can be traced in the score, which is held together by a heady mixture of Virgilian and Shakespearean poetry in the composers own libretto, and a uniquely Berlioz-ian Romanticism.

No other great opera, save perhaps Mussorgskys Khovanshchina, has such a crucial role for the chorus, and Nelson has at his disposal the combined forces of the Strasbourg Philharmonic Chorus, the choirs of the Opéra national du Rhin, and the chorus of the Badische Staatsoper, Karlsruhe, where the belated first staging of the opera (across two successive evenings) took place in 1890. The choral singing is hugely committed and dynamic, from the softest pianissimo to the loudest fortissimo, from the grandiose public scenes to the tormented cries at the end of Act 2, more than making up for the physical staticness of a concert format.

The solo cast is uniformly excellent and likewise largely Francophone, with two crucial exceptions in mezzo Joyce DiDonato and tenor Michael Spyres. You could say that DiDonato was fated to sing the role of Didon; that happy confluence of names apart, her performance surpasses that of her rivals on disc, and is one of her finest achievements to date. Her lightness of timbre brings a palpable vulnerability to the role, and her singing has an intense brilliance, resulting in a powerfully moving final scene as she prophesies the rise of Rome. She is matched in tonal refinement by of Michael Spyres, for whom the often high-lying part of Aeneas seems to present no challenges. His vocal colouring is a world away from the heroically dark yet ultimately unidiomatic style of Vickers (for Davis in 1969) but, like DiDonato, he successfully emphasises the fundamental humanity of the character, even when consumed by his noble public duty.

The operas other protagonist, in Acts 1 and 2, is the doomed Trojan princess Cassandra, who foresees the fall of Troy as well as the eventual founding of Rome. Here the part is taken by the Canadian contralto Marie-Nicole Lemieux, and she dominates the first part of the work with a performance of gleaming intensity, one of the finest accounts of this role on disc. All the other solo characters are taken with distinction, chief among them Marianne Crebassa as Ascanius (surely a Didon in waiting?), Stéphane Degout as Coroebus, and Hanna Hipp as Didos sister Anna. You dont need to read Nelsons booklet note to recognise the marvellous sense of collegiality that exists between the singers: much more than just a star vehicle, this is a tremendous team achievement by all involved, every minor character contributing to the overall impact.

That applies equally to the superb Strasbourg Philharmonic Orchestra, whom Nelson coaxes to a performance of spellbinding involvement and tonal subtlety. Berliozs score thrives on contrast, from the monumental to the pictorial, the violent to the calm, the grandiose to the intimate, and also on rhythmic vitality. Under Nelson, the orchestra is alive to all these nuances, from the great set-pieces of Acts 1 and 3, to the glowing evocation of nature in the Royal Hunt and Storm that opens Act 4 (complete with very French sounding saxhorns). Moments like the appearance to Aeneas of the ghosts of Priam, Coroebus, Hector and Cassandra have a spine-tingling quality that leaps off the page. Above all, the playing imparts to the opera as a whole that truly heroic temper that is its essence.

This is now surely the new benchmark recording of Les Troyens  one that does full justice to both the letter and the spirit of Berliozs masterpiece with immensely stylish performances from all involved. It is attractively packaged, with a substantial essay by Christian Wasselin and complete libretto, plus a bonus DVD of generous highlights from the concert performance, all at a highly competitive price. Even if you already have one or more of the classic recordings from the past, this new arrival must be a compulsory purchase, utterly enthralling from first note to last. And if you have none but have always wondered what all the fuss is about, theres no better way to take the plunge into Berliozs unique vision of this ageless story.

Colin Daviss studio recording of Berliozs Virgilian epic (Philips/Decca) has long held pole position, unsurpassed even by his later LSO Live version. This set, recorded live in Strasbourg in April, is so much more idiomatically cast than either. For DiDonato, Didon marks a watershed: she has done nothing finer on disc. This is singing in the Janet Baker/Lorraine Hunt Lieberson class, but I doubt either of those great Didons rose to the emotional extremes of suicidal despair that the American mezzo does here.  Hugh Canning (Album of the Week)
The Sunday Times 19 November 2017

From the very opening of the four-hour work  with a thrilling first salvo by the combined choruses of the Strasbourg and Karlsruhe operas as well as the Strasbourg Philharmonics own choir, answered by Marie-Nicole Lemieuxs electrifying delivery of Cassandras first warning  Nelson never allows the dramatic pace to slacken... If Lemieuxs performance dominates the first two acts, The Siege of Troy, then its Joyce DiDonatos Dido who hogs the spotlight for the rest of the opera  the three acts that make up The Trojans at Carthage. ...  Overall ... this is now unquestionably the version of Berliozs masterpiece to have at home.  Andrew Clements
The Guardian 22 November 2017

John Nelsons new recording of Berliozs magnum opus surpasses its predecessors, above all in the principal roles: DiDonatos Didon, Spyress Énée and Lemieuxs Cassandra are sensationally good.  Classical Album of the Year
The Sunday Times 3 December 2017

Now, though, comes a recording that surpasses all previous efforts. Made during and after concert performances given in Strasbourg last Easter, it presents an uncut reading in which nothing seems superfluous. The conductor John Nelson was clearly born with Berlioz in his genes... The principals couldnt be bettered today. Bright-toned, secure and vibrant, Michael Spyres makes a tremendous Enée. ... A performance as powerful as this makes it all the more poignant to think that poor Berlioz  scorned or misunderstood during his lifetime  only ever heard his masterpiece in truncated form.  Rupert Christiansen
The Daily Telegraph 2 December 2017

With this new set, taken from live concert performances in Strasbourg earlier this year, Erato has done the opera full justice. The recording is complete, with no penny-pinching in the orchestra (Berliozs six harps are all present stage left). Its American conductor, John Nelson, is the veteran of a significant number of staged productions  an achievement in itself when the work remains a rarity in the opera house. He has a live-wire grip on the score and gets detailed playing from his orchestra... Joyce DiDonato is by turns fiery and sensuous as the legendary Carthaginian queen, the silvery top of her voice adding an unusual vulnerability. It will be DiDonatos name that sells this recording. The performance has much else to recommend it besides.  Richard Fairman
Financial Times 17 November 2017

What is immediately apparent is what splendid results the engineers have achieved. The only hint that this recording is taken from live performances is the sheer adrenalin that pours through Berliozs spectacular set pieces, such as the visceral Royal Hunt and Storm from Act 4... The mercurial woodwind-writing leaps out of the speakers, as do the bass trombone snarls as we learn of the sea serpent swallowing Laocoön. Three choruses, drawn from the Opéra National du Rhin, the Staatstheater Karlsruhe and the Choeur de lOrchestre Philharmonique de Strasbourg, offer tremendously full-blooded singing. ... Nelsons cast is simply to die for. Marie‑Nicole Lemieux captures all the wildness and unhinged desperation of Cassandre, her burnt caramel contralto utterly compelling. ... Énée is sung thrillingly by Michael Spyres, the Berlioz tenor de nos jour, his Inutile regrets virile and ecstatic but refined too. ... His love interest in Carthage comes via Joyce DiDonatos noble Didon, her lighter, brighter mezzo providing a nice contrast to Lemieuxs Cassandre. ... The luxury casting of the minor roles is jaw-dropping... In short, this is a peach of a recording, with the strongest cast across the board of any Troyens recording setting a thrilling new benchmark for this epic opera.  Mark Pullinger (Recording of the Month)
Gramophone December 2017

... Nelson drives the drama with unforced tempos but ample theatrical vitality and grandeur. ... Most of the generally excellent secondary roles, the orchestra and two of the chruses are French, enhancing this recording's idiomatic feeling.  Michael Scott Rohan
BBC Music Magazine Christmas 2017