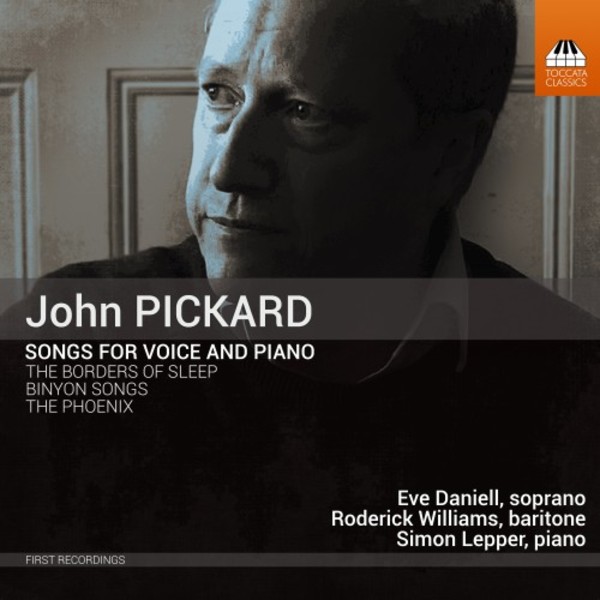 Binyon Songs
The Borders of Sleep
The Phoenix

Binyon Songs
The Borders of Sleep
The Phoenix

The English composer John Pickard (b. 1963) is best known for a series of powerful orchestral works, five symphonies among them. This album of songs  his complete output for voice and piano to date  demonstrates that he can generate drama on a smaller scale, too. Here he sets two less familiar poets of the First World War, often exploring mans relationship with nature, and a translation of a ninth-century Anglo-Saxon phantasmagorical allegory. These songs encompass a wide range of moods, requiring soaring vocal lines, declamatory authority and the gentlest intimacy, supported by piano textures that can flare up in freewheeling virtuosity.

The baritone Roderick Williams is one of the most familiar voices on the British and international scene, singing in the opera house and on the concert platform, and is in demand as a recitalist worldwide. He enjoys relationships with all the major UK opera houses and has sung a number of operatic world premières. His many festival appearances include the BBC Proms (including the Last Night in 2014), Edinburgh, Cheltenham, Aldeburgh and Melbourne. He was awarded an OBE in June 2017.

Simon Lepper is a professor of piano accompaniment and a vocal repertoire coach at the Royal College of Music, where he also co-ordinates the piano-accompaniment course. He is an official accompanist for BBC Cardiff Singer of the World Competition.