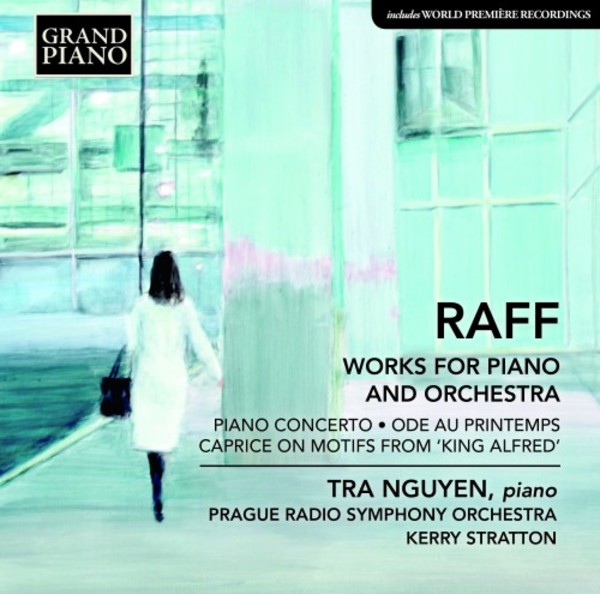 Raff - Works for Piano and Orchestra

» no.2 Caprice on motifs from 'King Alfred'
Piano Concerto in C minor, op.185

» no.2 Caprice on motifs from 'King Alfred'
Piano Concerto in C minor, op.185

Of Raffs nine works for solo instrument and orchestra three are for piano. The Ode au Printemps, op.76, is full of freshness, its atmospheric qualities and cantabile melodies enhanced by superb orchestration. Unjustly neglected but full of dreamlike delicacy, the Piano Concerto in C minor, op.185, offers one of the most delightful, lyrical and stirring works in the Romantic concerto canon. The Caprice, op.65 no.2, balances assured development and passionate virtuosity.

British-Vietnamese Tra Nguyen has performed worldwide at important venues, such as Queen Elizabeth Hall, Tokyo Opera City, Hong Kong City Recital Hall, Cadogan Hall and Wigmore Hall. Her imaginative programming balances core repertoire and lesser-known music, winning critical praise. Her recordings of Joachim Raffs piano music have earned wide critical acclaim, including an Album of the Week award by The Independent. Tra Nguyen studied with Lev Naumov at the Moscow Conservatory and with Christopher Elton at the Royal Academy of Music. She was awarded the ARAM (Associate of the Royal Academy of Music) for her significant contribution to the music profession in 2013.

Established in 1926, the Prague Radio Symphony Orchestra (PRSO) is a creative and versatile ensemble at the forefront of Czech music making. The orchestra has worked with a distinguished list of composers including Honegger, Khachaturian, Krenek, Penderecki, Prokofiev and Respighi as well as many of the worlds great conductors and soloists.

Nguyens interpretations of Raff are peerless. She inhabits the music. As this series has progressed, so has our indebtedness to her for shining a light on such an important part of Raffs oeuvre. Unreservedly recommended.  Raff.org (The Essential Raff)