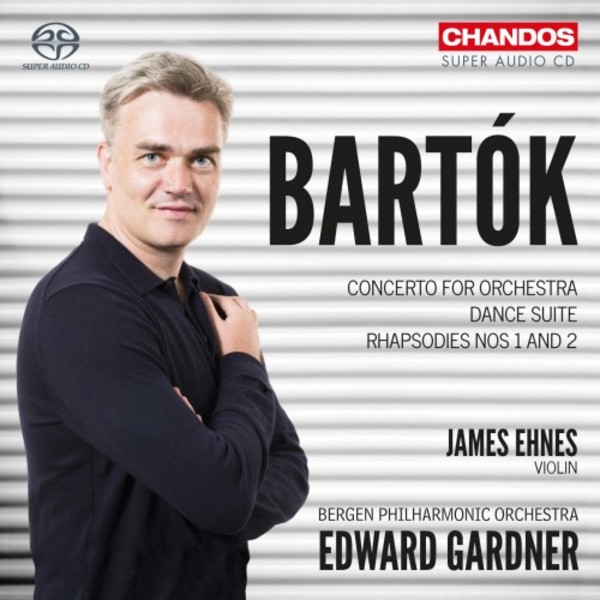 Four years after a highly successful Bartók recording with the Melbourne Symphony Orchestra, Edward Gardner here returns to the composer on SACD, with James Ehnes as solo violinist, and his Bergen Philharmonic Orchestra.

The central piece in this recording is the Concerto for Orchestra, the largest work that Bartók completed during the last five years of his life and described by the composer, in the programme notes for its 1944 premiere, as a gradual transition from the sternness of the first movement and the lugubrious death-song of the third, to the life-assertion of the last one.

It is joined by the Dance Suite, the immediate predecessor, among Bartóks few works for full orchestra without a soloist, of the Concerto for Orchestra, though by more than two decades; and by the violin Rhapsodies, the colourful folk influences of which are revealed by James Ehnes, a specialist in the repertoire, who already has recorded the complete sonatas as well as the concertos for violin and for viola to critical acclaim (CHAN 10690, 10705, 10752, 10820).

For his latest disc with the Bergen Philharmonic, chief conductor Edward Gardner tackles orchestral masterpieces by Bartók, fully living up to the promise of his impressive Janáček series with the same ensemble. Taking central place here are Bartóks two Rhapsodies for violin in their orchestral versions, played by the excellent James Ehnes as an appendix to his outstanding series of recordings (all on Chandos) of the concertos and chamber works for violin. Ehness gorgeous, silvery tone is versatile enough to inhabit these folk-inspired works in the two-part Verbunkos form, and the extra colours of the orchestral versions are utterly beguiling. Thanks to Chandoss unobtrusively excellent sound and Gardners fine sensitivity to balance, textures are unfailingly transparent, with extra dividends in the First Rhapsody, where the unmistakable tones of the cimbalom (played by Hans-Kristian Kjos Sørensen) ring through. Its also a considerable bonus to have both versions of the second Friss movement to Rhapsody no.1, the first more introspective and poised, the second dazzlingly virtuosic, each brought off with tremendous conviction and a real feel for the idiom. In the Second Rhapsody, theres a marvellously earthy insistence to the playing, and these accounts rank high among available recordings, and will be an absolute must for anyone whos been collecting Ehness Bartók series.

Gardner and the Bergen Philharmonic are ever-alert accompanists to Ehness playing, but its in the big framing works that they really come into their own. In the Dance Suite, composed for the 1923 celebrations to mark 50 years since the unification of Buda, Óbuda and Pest to form Budapest, Gardner and his players dig deep into their tonal resources for playing of real gutsiness. The often darkly suggestive colours are exceptionally vivid, at times redolent of the ballet The Miraculous Mandarin which Bartók was working on at the same time. In the second movement, the snarling brass is perfectly judged, yet theres also a real sense of exuberant energy, for example in the central third movement, which also incorporates some deftly realised magical textures. The elusively tranquil fourth movement evokes the sinister world of Bluebeards Castle, shaded to perfection by Gardner, while the Bergen players clearly relish and rise to the challenges of the episodic finale. Evoking folk music not just from Central and Eastern Europe but also North Africa, this is above all music of celebration, and for all its dark undertones the Bergen Philharmonic capture the overarching jubilant mood to perfection.

Even more impressive is Gardners traversal of Bartóks most famous work, the Concerto for Orchestra of 1943. Commissioned by Serge Koussevitsky for the Boston Symphony Orchestra, this is an orchestral showpiece par excellence, the soloists being the various sections and members of the orchestra itself. Yet its also the work of a refugee from war-torn Europe, physically frail and depressed; Koussevitskys commission revived Bartóks spirits, but theres a dark undertow to the music that emerges most obviously in the central Elegia, often lost sight of in many of the showier performances in the catalogue. Not so here: even amid the ebullience of the Game of Couples second movement, and the spoof-Shostakovich of the Interrupted Intermezzo fourth, theres the sense of a continuous narrative thread with a fundamental seriousness of purpose. Yet the playing itself is as assured and commanding as youll encounter anywhere, with some outstanding woodwind solos, and glorious strings and incisive brass. The swirling, shimmering textures that accompany the trumpets return in the second half of the second movement are thrilling, and the playing in both the scherzo movements is full of wit. The darker first and third movements have real depth, both textural and expressive, while the Finale is a real thriller, expertly paced, faultlessly balanced and with playing of a virtuosically high standard. This is above all a tremendously cogent account of Bartóks Concerto, and one to set alongside such greats as those from Iván Fischer and Zoltán Kocsis: proof that its not just the Hungarians who are alive to the underlying spirit of this music. Is it too much to hope that Gardner and his orchestra might give us a Bluebeards Castle in due course?

As ever with Bartók, the folk element is strongly present, here and throughout, in the Dance Suite (1923) and in the Rhapsodies Nos 1 and 2 (note the gorgeous, twanging cimabalom), with the ever persuasive Canadian violinist James Ehnes as soloist, full of Hungarian-Romanian zest. The Bergen orchestra sounds wonderfully alive to Bartóks rhythmic exactitudes.  Fiona Maddocks
The Observer 29 October 2017