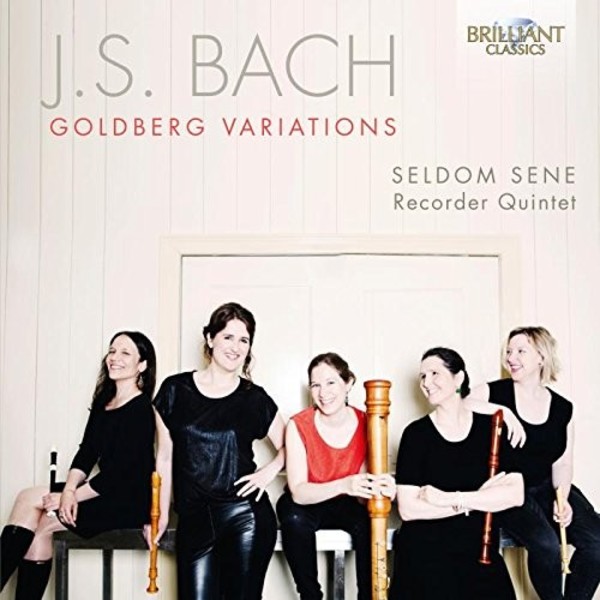 Bachs set of 30 variations on an original theme were first published in 1742 and composed (so the legend has it) for Johann Gottlieb Goldberg (172756), harpsichordist to the Russian ambassador to the court of Saxony Count Keyserlingk. Since that time they have attracted countless arrangements for and by musicians, sometimes in order to lend further colour or tease out the complex counterpoint of the variations, but more often for the privilege and the pleasure of playing this music for themselves, on instruments and in combinations that the composer could never have envisaged: string trio; saxophone quartet, even full chamber orchestra.
The fine young recorder quintet Seldom Sene now makes its own contribution to this rich history of Goldberg interpretation with a version created by one of their number, María Martínez Ayerza. As she observes in the booklet note for this new recording, it may seem surprising that an ensemble of five musicians chooses to arrange and perform a work which is mostly written in two or three parts, four at most. Indeed, on this disc they play all together for just a couple of minutes, in the Quodlibet, which quotes two rustic folk tunes. However, due to the relatively small range of the recorder, five players are needed to play the complete Goldberg Variations comfortably without making any modifications, which, for us, is an essential condition. The toccata‐style variations in particular require a wide range and agile playing in very high and low registers and provide plenty of work for all five players, while some of the canons, arias, fugues and dances work well in smaller settings from duo to quartet.
The homogeneous sound of a consort of instruments of the same family suits keyboard music very well, says Ayera. Ideally a consort is one instrument in the hands of five players. This is exactly the challenge we have enjoyed the most while preparing the Goldberg Variations: how to think, feel, articulate, time, breath, tune and phrase as one player. On the other hand, the singularity of each musician always remains and is in fact a great advantage, colouring each passage and contributing to shape our common interpretation.
A previous pair of Brilliant Classics recordings by Seldom Sene was widely reviewed and welcomed in the critical press. Of El aire el Serena (music from the courts and cathedrals of 16th‐century Spain, BC95304), the MusicWeb reviewer observed that This disc is a model of creative and thoughtful programming... The playing is of the highest order: immaculate intonation and perfect ensemble. Their debut album was Taracea (A Mosaic of Ingenious Music Spanning Five Centuries, BC94871), praised by Gramophone: The range of styles in this enterprising recital is only the most striking of several distinctive features. The programme is carefully chosen, the passage between styles cleverly judged on the whole, the contemporary works included here being especially well integrated.