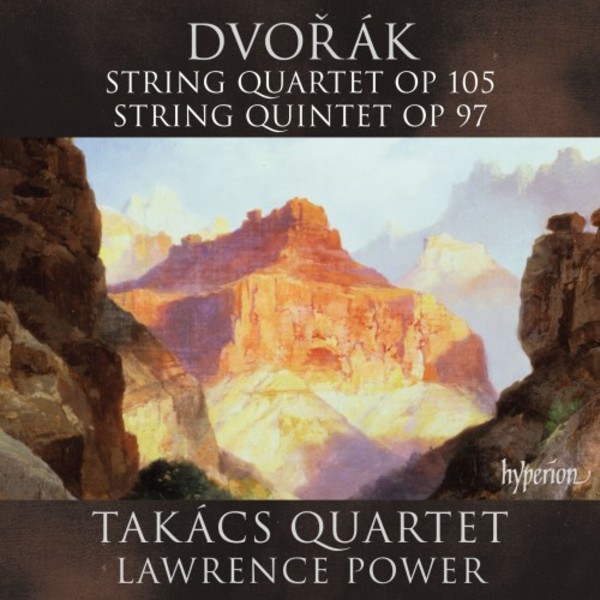 A new release from the Takács Quartet is guaranteed to be a highlight of the musical year, and this one easily exceeds all expectations. The American Quintet dates from Dvořáks sojourn in the New World, the Quartet from his return to old-world Prague; both are marvellous works, sounding here every bit the masterpieces they undoubtedly are.

Since transferring from Decca to Hyperion Records eleven years ago, the Takács Quartet have cemented their reputation as one of the very finest of present-day string quartets. Their steadily growing Hyperion discography has seen them tackling key works in the chamber music repertoire, and now, having already explored the quartets of Janáček and Smetana (CDA67997), they turn their attentions to Dvořák, in repertoire that they havent explored on disc since the 1990s. Expectations are always high for releases from this ensemble and, as ever, all the hallmarks of the Takács style are there: textual scrupulousness, tremendous emotional engagement and technical excellence aplenty.

For Dvořáks glorious String Quintet, op.97, the quartet is joined  as they were in Brahmss String Quintets (CDA67552)  by star viola player Lawrence Power, and the results are, if anything, even more compelling. Dvořák himself was a professional viola player, and he knew just how to use the instrument to enrich textures without clogging them up; here, Power and the Takácss resident violist Geraldine Walther savour every moment of the rewarding writing, in performances that are superbly animated and lit from within.

The Quintet was one of the main products of Dvořáks celebrated American sojourn (a stay which also produced such popular masterpieces as the American Quartet and the Symphony no.9 From the New World). In it, the composer taps into a distinctive vein of native American-inspired pentatonicism, as well as incorporating drum-like rhythms, and even (in the second half of the slow movements main theme) his own uncompleted setting of the American anthem text My country, tis of thee. This performance is as engrossing as the music itself: vibrant, colourful, rhythmically pert and powerfully expressive. In the masterly slow movement, the textural terracing of the second variation (first violin melody set against pizzicato second violin, quietly scurrying cello and rapid, light exchanges between the violas) is superbly differentiated, while the dramatically charged fourth variation creates a palpable sense of anticipation that erupts at the opening of the final section.

Theres an appealing lightness of touch to this account of the perky, rondo-form finale that relies less on pace than on textures of crystalline transparency. In the movements first contrasting episode, the players bring out a piquant folk flavour that is utterly captivating, and it all builds to a jubilant conclusion. By any standards, this is a great performance of one of the composers most radiant works.

By the time Dvořák completed the String Quartet in A flat, op.105 (his last work in the quartet genre) in December 1895, he had returned home to Bohemia and progressed beyond his highly individual American style to a late maturity that incorporated Schubertian lyricism, a variety of folk influences, and a highly sophisticated harmonic palette. All this combines to make his late music both challenging and endlessly rewarding. In spite of its brooding introduction, the A flat major Quartet is a cheerful, optimistic work with plenty to charm both performer and listener. In the infectiously dance-like Furiant second movement, there is a spellbinding transition from the central trio section back to the opening idea, yet another telling passage which is splendidly brought to life by the Takács players. In the Lento slow movement, their performance thrillingly encompasses both the exquisite sensitivity of the quieter passages and the passionate surges of emotion in the chromatically unsettled central episode. And in the lengthy finale, where Dvořák seems already to be testing the bounds of absolute music and striving towards the programmatic aesthetic of his final years, they successfully sustain momentum right through to the final exuberant bars.

This is chamber music playing of tremendous class, expertly recorded and with Hyperions customary detailed presentation (extensive booklet notes by Misha Donat). Regardless of coupling, this is an immediate top-choice disc, for rarely has either of these works been as well served as they are here.