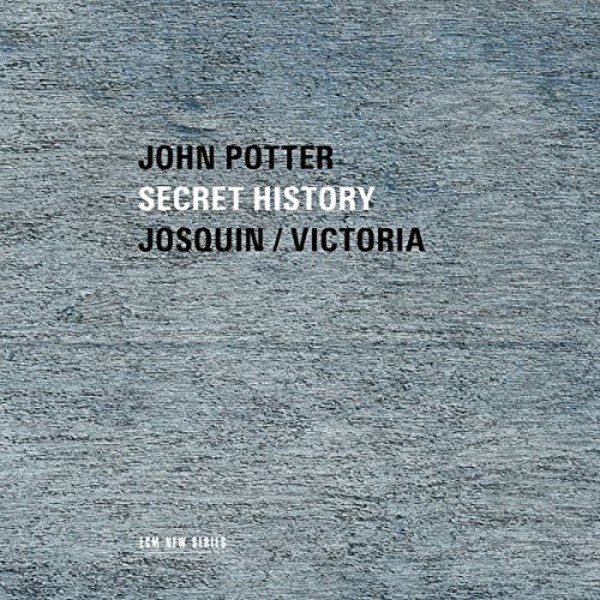 Tomás Luis de Victoria and Josquin Desprez were not contemporaries, they lived and worked in different countries, and perhaps shared little in terms of abstract compositional style.

Yet throughout Europe, generations of musicians recognized them as kindred spirits, and tablature versions of their masses and motets circulated amongst lutenists. For tenor John Potter, this is the secret life of the music - in historical terms its real life. In this characteristically creative project, Potter - joined by Trio Mediaeval singer Anna Maria Friman and three outstanding vihuela players - explores what happens to music after it is composed.

The album, produced by Manfred Eicher, was recorded at the St Gerold monastery in the Austrian mountains, where Potter previously contributed to Officium and other recordings with the Hilliard Ensemble and with The Dowland Project.

Heres a disc of music by Josquin and Victoria the like of which you wont have heard before. Couplings of the two composers  one early Renaissance, the other late  are rare enough. What makes this release especially interesting, however, is that the music is presented in a fashion that was widely disseminated during the Renaissance, but is little encountered in modern histories, recordings or performances. In his concise but engaging booklet note, the discs guiding force, tenor John Potter, explains that Josquins music in particular survives mostly in tablature for lute: a notation that, like modern guitar tabs, is extraordinarily specific about which notes are to be played, but which unlike modern staff notation is largely a closed book for non-lutenists. Most performances of this music during the Renaissance, he argues, would have been by voice accompanied by lute(s), rather than the pure, ethereal unaccompanied choirs we are now used to. (Think of a 19th-century parallel: in the age before sound recordings and radio broadcasts, most music lovers were far more likely to have encountered Beethovens symphonies  and even those of Brahms  in arrangements for piano duet than to have actually heard them in the concert hall.)

Although these tablature versions of Josquin and Victoria have generally been marginalised by musicologists, they reflect the important secret life of this music: what Potter calls, in historical terms, its real life. And the good news is, they work uncommonly well. On this recording Potter, a veteran of such groups as the Hilliard Ensemble, Red Byrd and The Dowland Project, is joined in several items by soprano Anna Maria Friman. The accompaniments  in fact, integral parts of the polyphonic weave  are provided by Ariel Abramovich, Jacob Heringman and Lee Santana on a variety of vihuelas (early guitar-like instruments, but tuned more like a lute). The fragility of Potters voice, especially in the upper range, combined with the intimate tones of the vihuelas brings to all the music an intimacy reminiscent of the more familiar Tudor sound-world. In particular, Victorias music, when heard via this medium, bears some striking points of similarity with Byrd and even Dowland.

The disc opens with a beautiful rendering of the motet Nesciens mater by Jospuins younger contemporary, Jean Mouton, with soprano and tenor accompanied by two vihuelas. The lions share of Victorias Missa Surge propera (which takes up the first half of the recording) then falls to Potter, again accompanied by two vihuelas, with Friman joining in the more expanded textures of the Benedictus and Agnus Dei. Yet another outstanding feature of this performance is interlacing of five Preludes by Jacob Heringman before each section of the Mass; models of stylistic probity, with an improvisatory feel to them, they further enhance the feeling of a private performance on which the listener is eavesdropping.

The second half is devoted mainly to Josquin: vihuela-duet versions dating from 1547 of his motets Inviolata integra et casta es and Obsecro te are preceded by vocalised chants of the same texts. For the celebrated Absalon fili mi, as well as Salve regina, voices and vihuelas combine, in delicate yet surprisingly sumptuous textures. A further layer of textural richness is achieved in Benedicata es and the most famous item on the disc, Nymphes des bois (composed on the death of the great Johannes Ockeghem), with viol player Hille Perl (luxury casting indeed!) adding bowed string tones which bring out the musics achingly long lines. This is the programmes expressive highpoint, the moment of maximum intensity, Josquins plaintive drooping phrases etching themselves on the listeners inner ear.

Setting the seal on this magically introspective disc is Victorias motet O magnum mysterium, arranged for two vihuelas. Like most of the arrangements here, it is made by the performers themselves: a further reminder that music history is shaped not just by composers and scores but also by performers and performances. Beautifully moulded and phrased throughout, this recording, presented with all ECMs customary tastefulness, is a tribute as much to the performers as to the composers and the music itself. For those with open ears as well as connoisseurs of the period, it will give endless delight.

...  instead of a full choir filling the corners of a lofty cathedral we get Potter, solo, with Jacob Heringman filling in the remaining lines on the vihuela, an instrument that is the missing link between lute and guitar. This is the secret of the title: that the choral works of four and five centuries ago were seen at the time not as fixed monuments but as music ripe for adaptation as intimate chamber pieces. Anna Maria Friman lends her pure soprano to some of Josquins motets, reworked as vocal duets, and the linking passages of chant or of solo vihuela give this pared-back disc a flowing, almost improvisatory feel.  Erica Jeal
The Guardian 24 August 2017