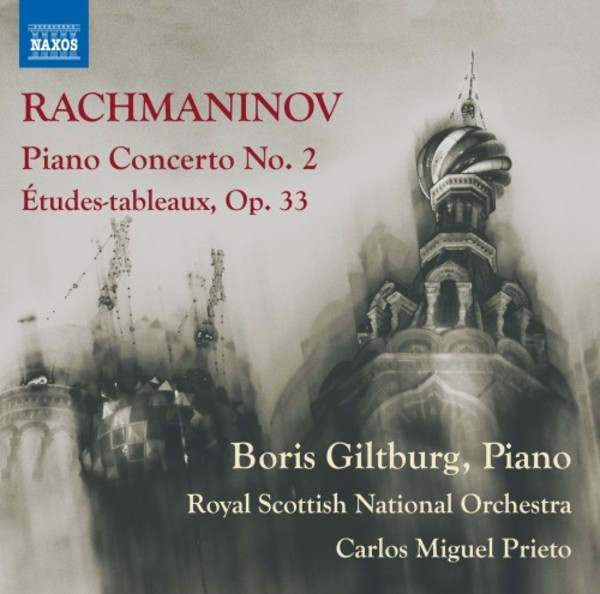 Rachmaninovs Piano Concerto No.2 is one of the most passionate and beloved concertos in the repertoire, its lyricism and virtuosity charting a trajectory from darkness through idyll to dazzling triumph. The Études-tableaux, op.33 are richly characterised musical evocations, expressive and often explosive, that reflect a more angular, modern aspect.

Boris Giltburg took first prize at the 2013 Queen Elisabeth Competition, having won second prize at the Rubinstein in 2011 and top prize at Santander back in 2002, and subsequently appearing across the globe. Notable débuts have included a South American tour in 2002 (and every season since), with the Israel Philharmonic in 2005, the Indianapolis Symphony in 2007, a tour of China in 2007, and at the BBC Proms in London in 2010. He has appeared with Marin Alsop, Martyn Brabbins, Edo de Waart, Christoph von Dohnányi, Philippe Entremont, Vladimir Fedoseyev, Neeme Järvi, Kirill Karabits, Emmanuel Krivine, Hannu Lintu, Vasily Petrenko, Jukka-Pekka Saraste, Tugan Sokhiev and Yan Pascal Tortelier, among others. In 2014 he began a long-term recording plan with Naxos.

Naxos 8573469 contains Boris Giltburgs performances of Rachmaninovs Études-tableaux, op.39, and Moments musicaux, of which BBC Music Magazine wrote: each note in a chord graded for colour and volume, giving a blended, multidimensional impression. If Rachmaninov envisaged landscapes, Giltburg turns them into sound-sculptures. It also won an American Record Guides Critics Choice award and was a Gramophone Recording of the Month.

Giltburgs Shostakovich Piano Concertos disc was also superbly reviewed (8573666). ClassicsToday.com gave it a 10/10 rating adding: These are big, bold, in-your-face performances that find a wider range of expression in both works than you might have believed possible. It was also a MusicWeb International Recording of the Month.

The Royal Scottish National Orchestra was founded in 1891 and has since became an integral part in Scotlands musical life, including performing at the opening ceremony of the Scottish Parliament in 2004. Their 3-volume cycle of Barbers orchestral music with Marin Alsop was highly successful, including a Rosette award from The Penguin Guide for Vol.1 (8559024) and Grammy Award nomination for Vol.3 (8559044).

One imagines that Giltburg must be thoroughly conversant with Rachmaninovs recorded legacy but his readings are far from simulacra. Rather than imitating Rachmaninov, Giltburg seems to imbibe the composers spirit. Doing so, he provides the best testimony I know of that Rachmaninovs 116-year-old signature concerto still has a long, healthy life ahead of it.  Patrick Rucker
Gramophone October 2017