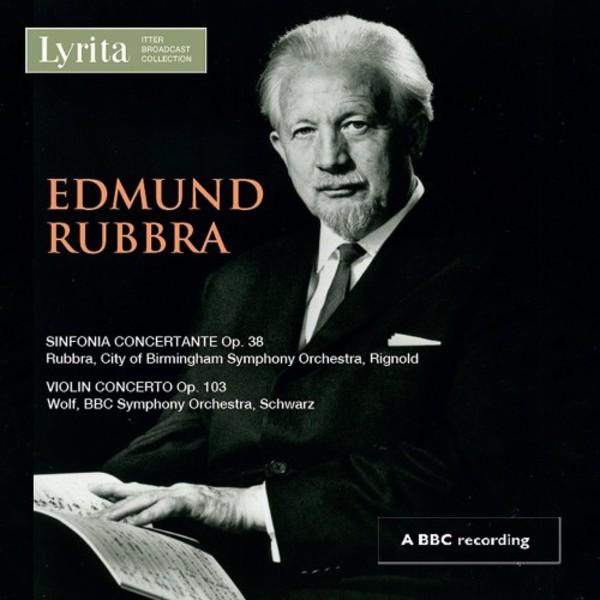 The Sinfonia Concertante for piano and orchestra, op.38, was written in 1934-1936 and revised and rescored in 1942-1943. The composer himself was the soloist in the premiere which took place in a Promenade concert with the BBC Symphony Orchestra conducted by Sir Adrian Boult on 10 August 1943. Rubbra also performed it with the London Philharmonic Orchestra under Sir Malcolm Sargent on 4 July 1946 at the second Cheltenham Music Festival.

The Prelude and Fugue on a theme of Cyril Scott for piano, op.69, was composed in honour of Scotts seventieth birthday in September 1949 and premiered by Margaret Good on 5 June 1950 in a BBC broadcast. It is based on three bars from the slow movement of Scotts Piano Sonata no.1, op.66.

As part of the Northampton concert of Cyril Scotts music which Rubbra organised in 1918, he programmed and performed four of Scotts short solo piano works. Nearly fifty years later, he chose to perform another brief solo piano work by Scott to round off his BBC recital on 9 August 1967, Consolation. In his brief spoken introduction to the broadcast performance, Rubbra described this as one of Scotts maturest pieces written at the height of his powers and characterised it as a deeply felt in memoriam written as a tribute to a close friend.

In 1958 he began work on the Violin Concerto, op.103, finishing it in the summer of the following year. It was premiered at the Royal Festival Hall on 17 February 1960 when the soloist was Endré Wolf with the BBC Symphony Orchestra conducted by its Principal Conductor at the time, Rudolf Schwarz. This first performance was relayed live and the BBC repeated the work in a Maida Vale performance three days  later. A recording of that impressive second performance is presented here.
 Paul Conway
BBC Broadcasts: 20 February 1960 (Violin Concerto), 2 May 1967 (Sinfonia Concertante), 9 August 1967 (Prelude & Fugue, Consolation)