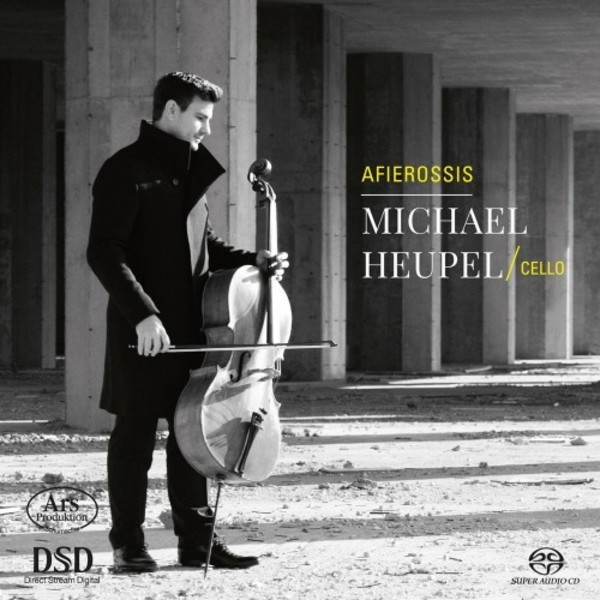 The Greek word afierossis (αφιέρωσις) can be translated as "dedication"; it contains the word hero (ιερό), meaning "sacred".

On this record I have sought to collect a range of more or less well known works for solo violoncello from the 20th and 21st centuries. Each work bears its own dedication - to a performer such as Mstislav Rostropovich, to a politician such as György Aczél, and even to a fictional character like Alexander Knight. I am happy and honoured to be the dedicatee of Efi Markoulaki's Cretan Suite.

The selection of contemporary works presented here is both versatile and varied. Walton's Passacaglia, written shortly before his death, is both a farewell and a paean to the beauty of the material world, and as such it provides an ideal introduction to this programme. Berthold Hummel's Fantasia II: in memoriam Pablo Casals explores a wide variety of playing techniques and timbres whilst also referring to the past with a musical elaboration on the letters of the names of Bach (B-A-C-H) and Casals (C-A-S-A-S) and a quote of the first verse of the Gregorian chant "Te Drum laudamus". Penderecki's Per Slava - a staple of the contemporary cello repertoire - evokes a very different set of associations even though it uses the same musical material, namely the B-A-C-H tone sequence. With their apparent simplicity and almost subtractive  character, Kurtág's miniatures Pilinszky János: Gerard de Nerval and In memoriam György Aczél, stand in direct contrast to the voluminous and virtuosic Toccata Capricciosa by the Oscar-nominated composer Miklos Rósza. Efi Markoulaki's Cretan Suite combines contemporary compositional techniques with traditional music from the island of Crete - a music which hasn't changed much since the Renaissance and which has accompanied me since my childhood. Sallinen's Elegie Alexander Knight'ille offers an intimate moment of relaxation before the two highly contrasting movements of Ligeti's Sonata for violoncello solo - the almost erotic Dialogue and the challenging Capriccio, inspired by Pagannini's virtuosity - that conclude the recording.
 Michael Heupel