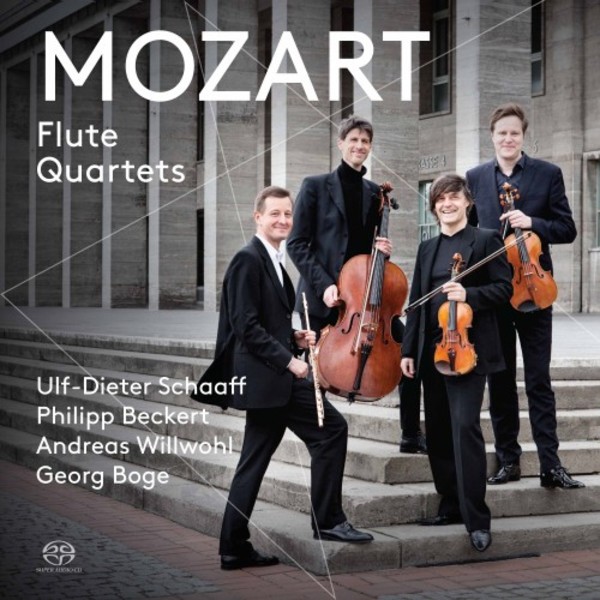 Graceful, refined and irresistibly charming, the Flute Quartets occupy an exquisite place in Mozarts chamber music. This light, airy music with its vivid contrasts, delicious textures and irrepressible wit is brought to life by the soloists of the Rundfunk-Sinfonieorchester Berlin.
The Flute Quartet in D K285 is a breezy affair written in concertante style which brims with attractive melodies. Its sublimely affecting slow movement was described by the biographer Alfred Einstein as perhaps the most beautiful accompanied flute solo that has even been written. The simple, unhurried Flute Quartet in G K285a contains a delightful interplay of instruments, while the Flute Quartet in C K285b has a charming theme and variations with a spirited finale. The playful Flute Quartet in A K298 is a later work perhaps written for a group of friends; it contains borrowings from other composers artfully woven into the engaging and witty score. The result is, of course, utterly winning.
Ulf-Dieter Schaaff, principal flautist with the Rundfunk- Sinfonieorchester Berlin is joined by his colleagues Philipp Beckert (violin), Andreas Willwohl (viola) and Georg Boge (violoncello). In their first recording for Pentatone, they chose an unconventional seating arrangement (with violin and flute on the outer flanks) in order to create a novel spatial effect in the music.