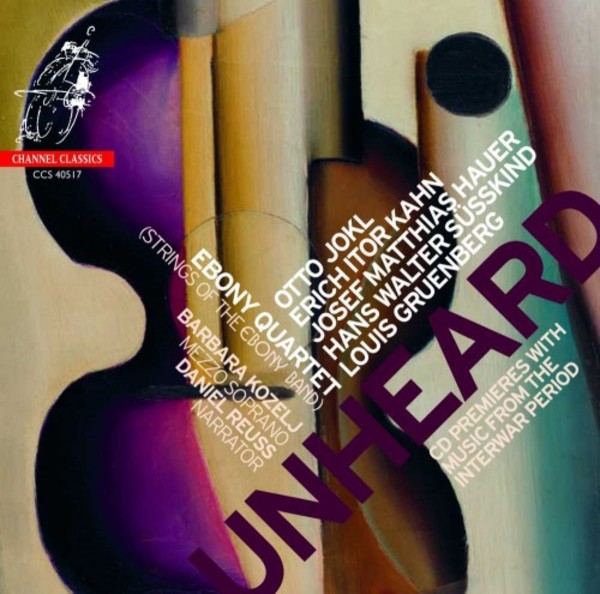 Unheard: Music from the Interwar Period

Fragment of an unfinished String Quartet

Fragment of an unfinished String Quartet

This CD is unheard, for, as far as we know, none of this music has ever been issued before. But this recording is also unheard-of, since every piece conveys an uncompromising, selfless idealism, on which the Nazis laid a curse, but which went to make the music of the interwar period so rich and engrossing. In short, the present CD provides a supplement to the incomplete history of the music of this period, and brings unjustly forgotten composers to life once again. The Ebony Quartet consists of musicians from the Royal Concertgebouw Orchestra. For many years they have formed the string nucleus of the Ebony Band, while also performing regularly as a quartet.
Together with the Ebony Band the quartet was awarded an Edison Klassiek in 1994 for the recording of Erwin Schulhoff's Concerto for string quartet and winds. The Ebony Band was founded in 1990 by Werner Herbers, former principal oboist of the Royal Concertgebouw Orchestra. The ensemble has devoted itself to the rediscovery and rehabilitation of music from the interwar period that was unknown, forgotten or considered lost. For many years a busy concert schedule took the Ebony Band as far as the USA, but its present mission is to document repertoire and issue hitherto unpublished works and CDs.

In the two decades or so since Deccas groundbreaking Entartete Musik series revived interest in music proscribed as degenerate in the 1930s and 40s by the Nazi regime, there has been an upsurge of interest in the works of composers like Haas, Krása, Ullmann and Klein who died in the Nazi death camps, as well as those like Korngold and Goldschmidt who were forced into exile. In recent years, the Ebony Band (all members of the Royal Concertgebouw Orchestra in Amsterdam) has unearthed more undiscovered gems from this darkest period of twentieth-century cultural history, and now on this new Channel Classics disc four of its string players  performing as the Ebony Quartet  present a fascinating collection of works for string quartet, all receiving their first commercial recordings.

Only the names of Matthias Hauer and Hans (or Jan) Walter Süsskind will be familiar even to specialist collectors: Hauer (1883-1959) is known as a pioneer (before Schoenberg!) of twelve-tone compositional techniques, though more by reputation than through acquaintance with his actual music. Süsskind (1913-1980) was better known in later years to British and American audiences as the conductor Walter Susskind. Erich Itor Kahn (1905-1956), Otto Jokl (1891-1963) and Louis Gruenberg (1884-1964) all took refuge in the United States, and are virtually unknown today, despite links with such important figures as Schoenberg and René Leibowitz.

All the music here captures the vibrant yet troubled creative atmosphere of central Europe during the interwar years, thanks to exceptionally vivid and committed performances from the Ebony Quartet. Kahns string quartet fragment opens proceedings with intimations of unspeakable world-weariness before becoming more animated but eventually petering out, incomplete, like Bachs unfinished fugue from The Art of Fugue. Hauers Five Pieces are composed not in twelve-note style but in a surprisingly accessible late atonal medium which finds room for clusters of expressive consonances, expansive slow music and energetic fast movements, while Jokls Second String Quartet inhabits an expressionistic medium that recalls Zemlinsky rather than Schoenberg, and is just as finely crafted. Gruenbergs mischievously-titled Four Indiscretions incorporate allusions to popular music, mixing the folk-like and the jazzy, suggesting open spaces as much as smoky cabarets.

The two works by Süsskind find string quartet joined by solo voice. In the Four Songs, the Ebony Quartet are joined by soprano Barbara Kozelj in settings of poems by the composers near-namesake and fellow Prague German, Wilhelm Emanuel Süskind (1901-1970). These are strikingly nuanced performances of beautifully fashioned music which capture much of the fragile angst of the late expressionist era. Most striking of all, however, is the cycle Rechenschaft über uns [Accountability for us], settings of spoken agitprop texts by the German communist poet Louis Fürnberg (1909-1957). They are delivered with a tremendous feeling of downtrodden anger and defiance by narrator Daniel Reuss, while the close mirroring of text in the music at some points recalls the Schoenberg of Pierrot Lunaire.

For those listeners who have already discovered the expressive potency of music by Pavel Haas, Hans Krása and their contemporaries, this disc is essential further listening. The Ebony Quartet have found some real treasures here, missing links in the history of the twentieth-century string quartet. With detailed notes by producer Werner Herbers, and predictably fine recorded sound from Channel Classics, this is one of the most interesting releases to come our way so far this year. Compelling listening indeed!

All the pieces the Ebony Quartet play could roughly be described as expressionist, with their chromaticism constantly flirting with atonality.  Kahns Quartet Fragment, probably composed around 1924, is strikingly lyrical, and recalls the quartet writing of Zemlinsky more than anyone. The ghost of Bergs Lyric Suite seems to lurk behind parts of Jokls Second Quartet, just as there are echoes of Janáček in Gruenbergs Four Indiscretions. All these pieces are played with tremendous commitment and finesse by the Ebony Quartet, who transmit their belief in its enduring quality in every bar.  Andrew Clements
The Guardian 16 August 2017