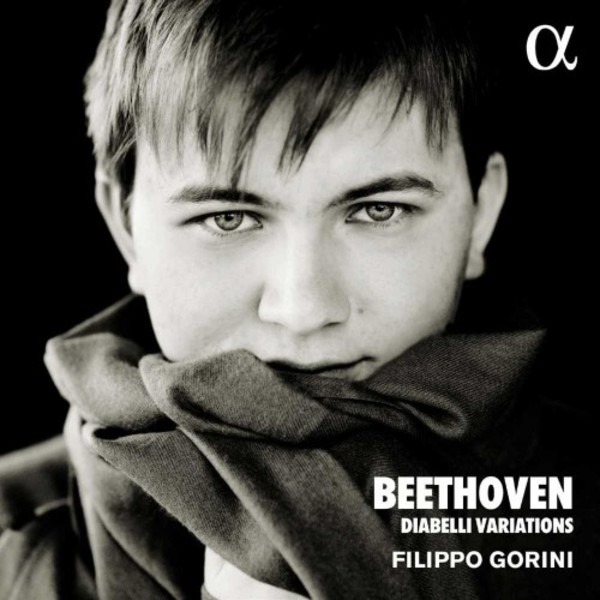 Supporting new talents is in Alphas DNA. Here is the very first recording of the Italian pianist Filippo Gorini, who was recently awarded First Prize in the Telekom-Beethoven Competition in Bonn. He has also won the same competitions Audience Prize twice over. At just twenty years of age, he has already played in such prestigious venues as the Berlin Konzerthaus, the Leipzig Gewandhaus, the Laeiszhalle in Hamburg, the Herkulessaal in Munich, the Liederhalle in Stuttgart, Die Glocke in Bremen, the Royal Academy of Music in London, and the Moscow Conservatory. Strongly supported by Alfred Brendel, with whom he studies, he has chosen to tackle a monument of the piano repertory, the Diabelli Variations, a work whose interpretation he has matured through frequent performance, notably at the Beethoven Competition where it was the key item in his winning programme. And, appropriately, it is at the Beethovenhaus in Bonn that he made this first disc, the start of a highly promising recording career.
The vote of our members was very clear. Filippo Gorini is the second youngest winner of the Beethoven Ring at the age of 21. But, at a young age, he has already dealt with the music of Ludwig van Beethoven. He has proved this already when he won the 'International Telekom Beethoven Competition Bonn' in 2015 and he has now confirmed it at the Beethovenfest. - Stephan Eisel, chairman of Citizens for Beethoven