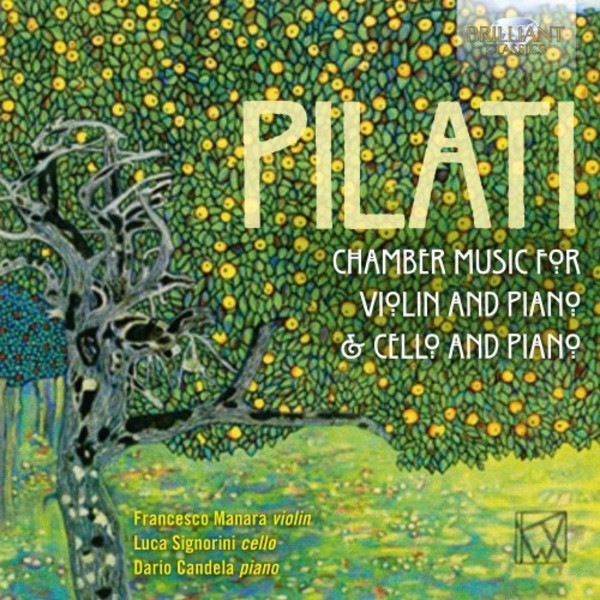 » Sarabanda for violin and piano
Violin Sonata in F minor

» Sarabanda for violin and piano
Violin Sonata in F minor

Who was Mario Pilati? A significant if shortlived (1903-38) figure in Italian instrumental music during the 1920s and 1930s: a gifted conductor, fluent pianist, practical teacher, essayist and perspicacious observer of the musical life of his times.

His own music is celebrated here, and anyone who takes pleasure in Romantic chamber music, the neoclassical idiom of Stravinsky, or the vigorous yet always lyric idiom of Respighi and Casella, will find much to enjoy here. In fact Pilatis music for piano and for orchestra has received some attention on record; much less so his chamber works, making this new 2-CD set an important addition to Brilliant Classics unrivalled catalogue of Italian music from 1850-1950.

The troubled expression of the three-movement, half-hour sonatas for violin and cello (1928) reflects the temper of their times, whereas the Preludio, Aria & Tarantella on Old Neapolitan Folk Tunes for violin and piano apparently turn away from intense battles between tension and reconciliation with the kind of light touch and folk-inspired humour that may be found in the best early works by Casella.

There are several miniatures from the 1920s which attest to Pilatis elegance and sophistication early in his career, as well as to the excellence of his training in his native Naples (though he moved to Milan at 22 and made his career there). Despite its name, Inquiétude is a flowing study for piano, reminiscent of Debussy. The set is completed by his two volumes of Bagatelles for solo piano, which frequently draw on Neapolitan themes: 11 relaxed and convivial pieces in all, of an easy charm that would not disgrace Pilatis friend Nino Rota, and written in an accessible style which may reflect their dedication to the composers three daughters.

The album is comprehensively documented with valuable notes on both the composer and his work by the pianist Dario Candela: a student of Aldo Ciccolini, who described his pupil as an excellent pianist of great class. He is joined here by Francesco Manara  a former leader of the orchestra at La Scala, Milan  and the cellist Luca Signorini who, like Pilati, pursues a diverse career as a performing musician, conductor and writer.