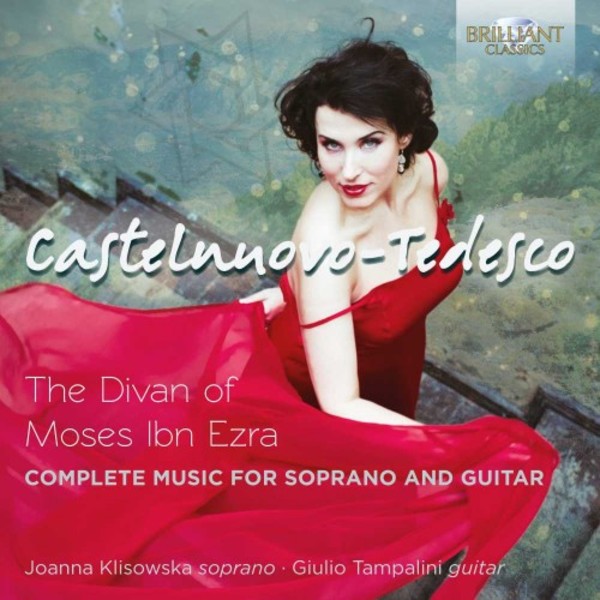 This is the fourth volume on Brilliant Classics of the vibrantly cosmopolitan music of the Jewish-Italian, US composer Mario Castelnuovo-Tedesco. His heritage is reflected in this substantial song-cycle for soprano and guitar, receiving here only its second modern recording. The Divan of Moses Ibn Ezra is a setting of 19 poems, in a modern English translation, by a medieval Spanish Jew who wrote, like Castelnuovo-Tedesco almost a millennium later, in exile.

Thus the subject of its first section is Songs of Wandering, before friendship and love turn sour in the second section. Sorrow and defeat also mark the third, Of Wine, and of the Delights of the Sons of Men  though still within the composers appealingly melodic vein  before the return of spring and a more positive outlook to close the cycle, in which the poet bravely faces The World and its Vicissitudes before contemplating mortality with calm resignation in a moving epilogue.

The piece is a substantial addition to the growing discography of the composer on Brilliant Classics, including releases dedicated to his guitar studies (BC95219), duets (BC94833), concertos (BC7615) and piano music (BC94811), as well as samples of his prolific output on several compilations. The fine Italian guitarist Giulio Tampalini has his own impressive discography on the label, in music by Paganini (BC95031), Mozzani and Respighi (BC95230), Tárrega (BC94336) and more. Here he is joined by the Polish soprano Joanna Klisowska, who has sung with many major European early-music ensembles.

The album is completed with individual songs in Spanish and Italian as well as two settings of Shakespeare. Ranging in date across the composers long career, they exhibit his full stylistic range, from the impressionistic, late-Romantic language of the English songs to the more harmonically adventurous terrain of two Spanish folksongs.