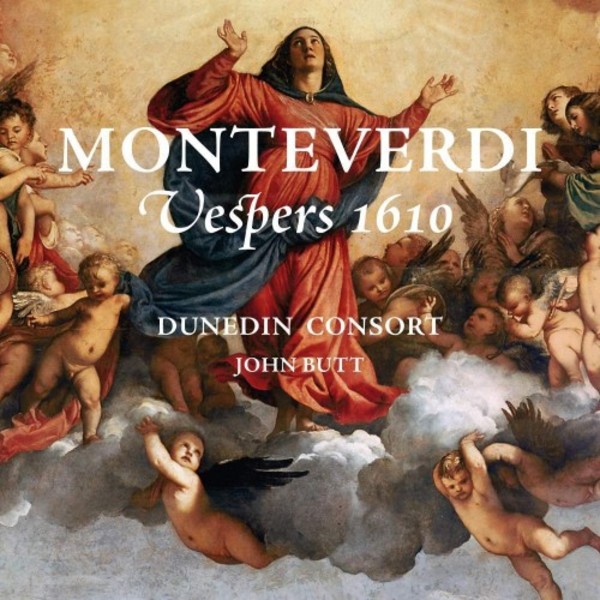 The sonic grandeur of Monteverdis spectacular masterpiece is expertly realized in this recording by John Butt and the Dunedin Consort. Together with the virtuoso players of His Majestys Sagbutts and Cornetts and a star-studded line-up, including Peter Harvey, Joanne Lunn and Nicholas Mulroy, the Dunedin Consort delivers the perfect recording to celebrate the 450th anniversary of Monteverdis birth.
The raison d'être for this recording was reinforced following a performance of the Vespers at the 2016 Lammermuir Festival which wowed the critics: The Herald called it superbly stylish... an exhilarating performance whilst The Scotsman stated it is hard to imagine a more exquisite, deeply felt performance.
In direct contrast to more typically lavish stagings, John Butts preference for single part performance brings a welcome sense of intimacy to Monteverdis most famous work. In eschewing pomp and circumstance, John Butts approach delivers a fresh, modern performance that allows the individuality of the soloists to shine.
The Dunedin Consort has established a reputation as one of the finest period performance choirs around, under the direction of prize-winning historical performance specialist John Butt, OBE. The multi-award-winning group has won praise for the natural style of its soloists and renown for the virtuosity of its singers. In addition to a Grammy nomination, the Dunedin Consort has won two Gramophone Awards: the 2007 Baroque Vocal Award for Handels Messiah and the 2014 Choral Award for Mozarts Requiem. Gramophone included the Dunedin Consort in its Twenty Greatest Choirs list and three of its recordings have been named a Building A Library: First Choice by BBC Radio 3s Record Review.
Evanescent, visceral, thrilling Monteverdi... - The Guardian
This richness and variety shone through in this superbly stylish and joyful performance from Dunedin Consort. - The Herald
It is hard to imagine a more exquisite, deeply felt performance. - The Scotsman

Monteverdis LOrfeo and Lincoronazione di Poppea might be more familiar to opera audiences, and discs of the madrigals may have proliferated in recent years, but it is the Vespro della Beata Vergine, published in 1610, that are undoubtedly the composers calling card, both in live performance and on disc. Since their first recording in 1953 (by Leopold Stokowski, no less, with University of Illinois forces), the Vespers have become Monteverdis most recorded work, with iconic performances by Anthony Lewis, Jürgen Jürgens, John Eliot Gardiner, Nikolaus Harnoncourt and Andrew Parrott, among many others. Latterly, native Italian ensembles have at last made important contributions to the discography, among them Rinaldo Alessandrinis Concerto Italiano and, most recently, La Compagnia del Madrigale on Glossa. But British groups have always been in the vanguard in this repertoire, and it is good to see (and hear) that John Butts excellent Dunedin Consort - hitherto best known for their fine recordings of Handel and Bach - have joined the throng, particularly in the composers 450th anniversary year.

In his customarily detailed and thoughtful booklet notes, Butt explains his decisions to set down what is in effect a concert performance of the Vespers rather than a liturgical reconstruction complete with chant (as practised by Parrott and his Taverner forces on Veritas x2), as well as the use of single voices (ten in total) and correspondingly small instrumental forces (18 instrumentalists, including the six players of His Majestys Sagbutts & Cornetts). This is a very different sound from the studied grandiloquence of Gardiner on DG Archiv, and it means that, although there is scarcely any loss of opulence in Monteverdis majestically-scored tutti sections, the work as a whole takes on a more human face, not just in the operatically expressive motets (or sacred concertos) interleaved between the Psalm settings, but also in the Psalms themselves and in the multi-section Magnificat (only the seven-voice version is included). This is surely an important aspect in a work that was compiled by Monteverdi after a period of crisis towards the end of his years of service in Mantua: overworked and underpaid, but also still grieving for his late wife and exhausted following the demands placed on him by the marriage ceremonies for Francesco Gonzaga.

Other issues addressed by Butt are the pitch at which the work is performed (a semitone higher than most other period instrument recordings, lending a marked and pleasing brightness to the sound), and the use of a sampled virtual organ to reproduce the sounds of an authentic Italianate organ within the acoustic of Greyfriars Kirk, Edinburgh, where the sessions took place. Perhaps most importantly of all, Butt offers his own thoughts on the thorny question of tempo relationships between sections, which bear fruit in some unexpected and highly persuasive changes of gear.

As for the wider virtues of the performance, any ensemble including such accomplished artists as soprano Joanna Lunn, bass Peter Harvey, and the distinctive tenor of Nicholas Mulroy has nothing to fear from competition, domestic or international. The special demands placed on the solo voices, not least the tenors, are tackled with superb stylishness: the motets Nigra sum, Duo Seraphim and Audi coelum are as compelling and convincing as on any rival recording, which is saying much. The instrumental contributions are similarly impressive, above all in the exuberantly dance-like Sonata sopra Sancta Maria, a performance positively bursting with energy and colour. Like the recording as a whole, the Magnificat achieves an ideal balance between passion and magnificence: the decision to transpose this (as well as the Psalm Laudate Jerusalem) down a fourth results in some wonderfully fruity low textures from the basses. It builds to an irresistible climax, setting the seal on a work that, in Denis Arnolds memorable words, seems to inhabit a world of its own.

The recorded balance throughout favours the voices to just the right degree for such forces, while sounding as natural as ever from the Linn team. Rhythms are buoyant and the faster sections are generally brisk, though thankfully not to the extent of Christina Pluhars currently unavailable account with LArpeggiata. If youre looking for an account of the Vespers that avoids the eccentrically languid speeds of La Compagnia del Madrigale or the suave extravagance of Gardiner, this endlessly absorbing, beautifully presented and intensely focused performance from Butt and his forces ticks all the right boxes. What better way to mark the 450th birthday of one of western musics greatest geniuses?

This compelling and insightful album is an outstanding contribution to Monteverdis 450th anniversary... Particularly effective is the coloristic sonority of the organ which, by employing the Hauptwerk system, reproduces the sound of an early Venetian instrument.  Anthony Pryer
BBC Music Magazine October 2017

Gone are all plainsong antiphons and other contextual additions; what is presented instead is a varied collection of individual pieces of sacred music. This is a shock, though the recording sounds fresh and clear, emphasising transparency without a big reverberant acoustic.  Nicholas Kenyon
The Observer 24 September 2017

Butts series of big choral pieces with minimalist forces continues with this chamber version of Monteverdis liturgical compilation. The Dunedin Consorts 10 voices combine to make a magnificent choral sound in Lauda Jerusalem, yet have the flexibility for the melismatic writing of their solos in Pulchra es and Duo Seraphim. Butts decisions for this idealised vespers are scholarly, culminating in the Magnificat for seven voices.  Hugh Canning
The Sunday Times 3 September 2017

Any recording by Butt is an event. And this one, recorded with a small, hand-picked choir of ten voices, is special even by his elevated standards.  Album of the Week
Classic FM 25 September 2017

...a brisk bright sounding performance and if you miss the grandeur of the larger forces you gain in clarity, transparency and rhythmic flexibility as well. And the standard of solo singing is outstanding, beautifully ornamented. It's typical Butt, he'll have you rethinking how Monteverdi's Vespers might sound and it's a well matched recording as well.
Record Review (BBC Radio 3) 9 September 2017

... both a character of its own and something to say.
Gramophone October 2017

If you want some Monteverdi in your life, you cant do better than this new recording of his Vespers from the Edinburgh-based choir the Dunedin Consort, under their music director John Butt, a man of many talents: a first-class musicologist, a communicator with a gift for explaining complex points, and an excellent conductor.  CD of the Week
The Mail on Sunday 25 September 2017

Butts series of big choral pieces with minimalist forces continues with this chamber version of Monteverdis liturgical compilation. The Dunedin Consorts 10 voices combine to make a magnificent choral sound in Lauda Jerusalem, yet have the flexibility for the melismatic writing of their solos in Pulchra es and Duo Seraphim. Butts decisions for this idealised vespers are scholarly, culminating in the Magnificat for seven voices.
The Sunday Times 1 September 2017