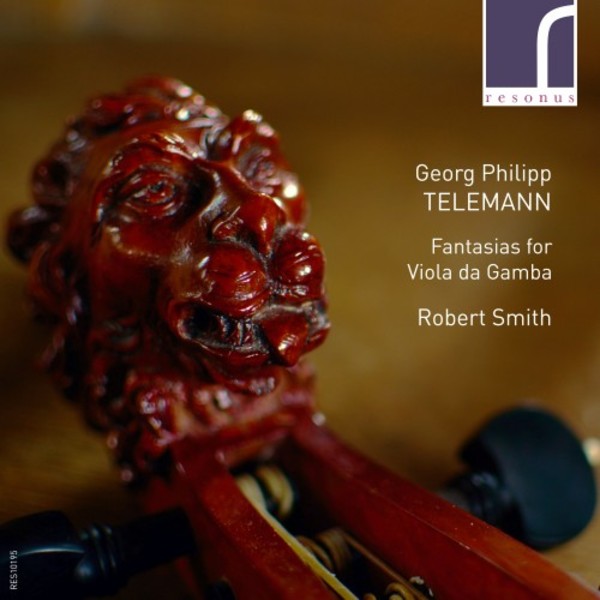 Lost to the world for centuries, the recent rediscovery in 2015 of Georg Philipp Telemanns twelve Fantasias for viola da gamba represents a major addition to the solo repertoire of the instrument.

In the year of the 350th anniversary of Telemanns death, acclaimed Amsterdam-based gambist Robert Smith brings these long forgotten works back to life with this striking recording of the complete set of fantasias in a vital addition to the Telemann discography.

Its surely a sign of the health of the classical recording business that Telemanns music  for so long conspicuous by its rather threadbare representation in the catalogues  has been so well served in this anniversary year. Alongside the inevitable reissues have been a spate of vibrant new recordings which perfectly illustrate why Telemann, as well as being one of the most prolific composers of his time, was also one of the most highly regarded. As if to prove the point, here is a marvellous new account from the Resonus label of the twelve Fantasias for solo viola da gamba. These works were only rediscovered  having been presumed lost  as recently as 2015. They are part of a series of fantasias he composed for four different solo instruments between 1732 and 1735, the others (all in sets of twelve) being for flute, violin, and harpsichord.

By the early 1730s the viola da gamba was already falling victim to fashion, replaced by the cello as the solo low string instrument of choice, but Telemann the self-publisher was astute enough to be aware that there was still a lively amateur market for the viola da gamba, and it also appealed to French tastes, retaining a Gallic foothold long after it lost one in the German-speaking lands. Sure enough, these Fantasias abound in graceful French stylistic traits, but theres also a generous helping of Germanic counterpoint, often only implied but sometimes realised with the multiple stops for which this instrument is particularly suited.

This recording is not the first to be issued since the Fantasias rediscovery, but its immediately apparent that it is by some distance the finest. English gambist Robert Smith, a pupil of Mieneke van der Velden and Paolo Pandolfo, no less, has already set down two acclaimed discs of chamber music for Resonus (Conversed Monologue, RES10166, and The Excellency of Hand, RES10186). Now, for his first solo disc, he coaxes an outrageously beautiful, richly sonorous tone from his instrument, the splendid lion-headed scroll of which graces the album cover.

Under Smiths experienced, marvellously sensitive hands, these works burst into life, and a dazzling array of invention and technique is unfolded before the listener. Smiths particular talent is to allow the instrument to speak with total naturalness, keeping the music rhythmically buoyant and skilfully applying subtle rubato  the tiny give-and-take in speeds and phrasing  that, with some period players, can seem excessively mannered, but here is never obtrusive, always completely at one accord with the trajectory, the ebb and flow of Telemanns music.

And the music itself? Ten of the Fantasias are in three movements, either slow-fast-fast or fast-slow-fast. The first two Fantasias are in two movements, but in each case the first movement alternates between two tempi. The opening Vivace/Andante of the second Fantasia is particularly memorable, both for its expansiveness (at seven minutes, it is by far the longest movement of the set) and for its off-rhythm gigue-like opening idea. The expressive range of these works is enviably wide, from the melancholy, introspective Grave of No.9 to the almost childlike playfulness of the Scherzando that concludes No.10. Best of all are the frequent throw-away endings, which Smith injects with a spontaneity that characterises his performances as a whole. As for the cadenza-like upward skidaddle before the closing bars of No.11s opening Allegro  its positively indecent!

This disc is the perfect follow-up to one of Resonuss best-sellers, David Watkinss superb traversal of Bachs Cello Suites (RES10147). For anyone who knows and loves Bachs Suites, Robert Smiths Telemann is an absolute must: no praise could be higher. Grab a copy, and relish Telemanns extraordinary music, brilliantly played.

Whatever the mood, this is playing of exceptional quality. Robert Smith navigates each piece with clear-eyed musicality, always weaving a beautifully sonorous, coherent line through Telemanns rich invention.  Stephen Pritchard
The Observer 30 July 2017