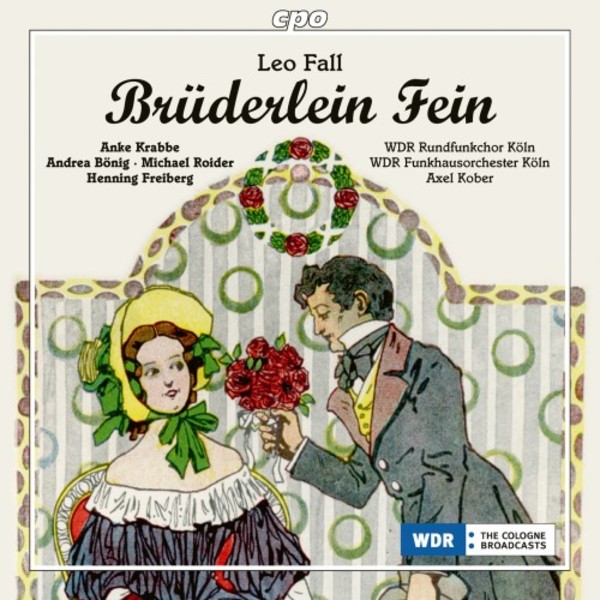 Following Der fidele Bauer, Paroli, Die Kaiserin, and Madame Pompadour, CPO are now proud to present Leo Falls Brüderlein fein  and in 2018 they plan to release Die Dollarprinzessin! Brüderlein fein is an Old Viennese Singspiel in one act that is closely related to the operetta. The libretto is by Julius Wilhelm, who was regarded as a specialist in the tales of Old Vienna that had been the fashion since the turn of the century  just when the city began to be transformed into a modern metropolis. Old Vienna was created as its idyllic opposite, as the fiction of a Biedermeier city in which life was a dream, an image that continues to exercise its fascination even today. Brüderlein fein explores a fictional episode from the life of the legendary composer Joseph Drechsler. From 1822 to 1830 he was the conductor at the Leopoldstadt Theater, where he wrote the stage music for Ferdinand Raimunds Zaubermärchen. His last and most famous work, Der Verschwender, contains Brüderlein fein, the song from which the title of Falls one-act work was derived. For this delightful subject Leo Fall developed an affectionate tone, endowing it with a warm sound all of his own. The Neue Freie Presse went into raptures: Leo Fall has adorned the outstanding libretto with a sounding and singing wreath of sweet Old Viennese melodies numbering among the most fragrant gifts of this master so strong in feeling and emotion. The premiere on 1 December 1909 was followed by 113 more performances in the Hölle Cabaret in the cellar of the Theater an der Wien, bringing Fall one of his greatest successes.