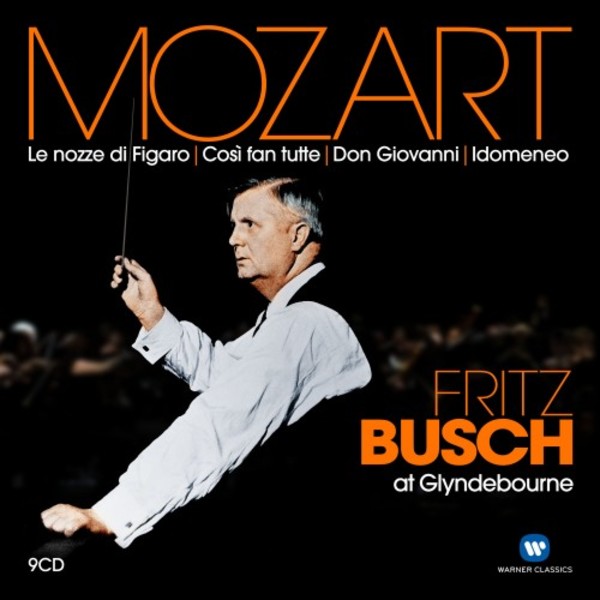 The operas of Mozart are synonymous with the festival at Glyndebourne, where exemplary performances are staged amidst the verdant landscape of southern England. Glyndebournes first music director was the distinguished conductor Fritz Busch, an exile from his native Germany. These pioneering recordings, deriving primarily from performances at Glyndebournes original theatre, date from the festivals inaugural season (1934) and the years to 1951. Both Le nozze di Figaro and Così fan tutte were world premiere recordings  indeed, Figaro was the first-ever complete recording of a Mozart opera. In newly remastered sound, these classic interpretations of the three Da Ponte operas and Idomeneo can be enjoyed with unprecedented immediacy.

Fritz Busch (1890-1951) was one the greatest German conductors of the first half of the twentieth century, noted for his illuminating performances and his ethical principles. His father was a former itinerant musician who became an instrument maker, and his brothers were violinist Adolf Busch and cellist Hermann Busch. Fritz Busch went to Cologne Conservatory in 1909, studying conducting with Steinbach.

He became music director of the city of Aachen in 1912, serving there until World War I began. After serving in the army during the war, he returned to Aachen to conduct the Municipal Opera. Six weeks later, he was appointed music director of the Stuttgart Opera. He quickly became famous for his performances and for enlarging the repertory and discovering new composers. He premiered operas by Paul Hindemith and Pfitzner, and adopted the designer Adolphe Appia's revolutionary approach for a staging of Wagners Ring. In 1922, Busch became music director of the Dresden State Opera. Among the premieres in his 11 years there were Strausss Intermezzo (1924) and Die Ägyptische Helena (1928), Hindemiths Cardillac (1926), Busonis Doktor Faust (1925), and Weills Der Protagonist (1926). He maintained high artistic levels with often progressive and provocative stagings and used leading artists to design sets and costumes. At the 1932 Salzburg Festival he conducted a notable production of Mozarts Die Entführung aus dem Serail, designed by Carl Ebert and superbly cast,

Buschs open contempt of the Nazi government, which came to power in Germany in 1933, caused him to be fired from his post in Dresden. At the Teatro Colón in Buenos Aires he conducted the first-ever complete performance of Bachs St Matthew Passion to be given in the Americas. He returned to Europe, appearing with the Danish Radio Symphony Orchestra and the Stockholm Philharmonic, beginning a long-standing relationship with them.

Then John Christie, a wealthy English landowner, invited Busch to become music director of a summer opera festival at Glyndebourne, a country estate not far from the coast in Sussex. Busch accepted, bringing Carl Ebert as artistic director. Glyndebourne soon became a prestigious summer festival, famous for meticulous musical preparation and astute casting. Mozart became they mainstay of Glyndebourne, but Busch also staged larger-scale works, including Donizettis Don Pasquale and Verdis Macbeth. After the outbreak of World War II (which closed Glyndebourne from 1939-1945 and made travel to Scandinavia impossible), Busch withdrew mainly to South America, although he made appearances at the New York Philharmonic. His Metropolitan Opera debut took place on 26 November 1945 with Wagners Lohengrin. He remained on the Mets conducting roster until 1949, but focused on conducting the companys annual national tours. He frequently conducted the Chicago Symphony between 1948 and 1950, and resumed his association with the Scandinavian orchestras (in 1949) and with Glyndebourne (in 1950). He returned to lead a few concerts in Austria and Germany (Vienna State Opera, 1950; Cologne and Hamburg, 1951). Fritz Busch died in London on 14 September 1951.

The opera festival at Glyndebourne

The curtain rose on the first Opera Festival performance at Glyndebourne on 28 May 1934. It was intended as not the best we can do, but the best that can be done anywhere. Those were the words of the festivals founder, John Christie (1882-1962), who owned the estate at Glyndebourne in East Sussex. He felt that it [opera] was almost non-existent in England, so we ought to begin to bring it here. His wife Audrey Mildmay, a professional soprano, was his partner in the Glyndebourne project. The couple had met at Glyndebourne in 1930 when Audrey had been engaged to enhance one of Johns amateur opera productions in the Organ Room of the house at Glyndebourne.

After the couple had spent their honeymoon at the Salzburg and Bayreuth Festivals, John planned to extend the Organ Room to accommodate more ambitious productions. Audrey encouraged him to build a real theatre and he commissioned a 300-seat opera house with an orchestra pit and sophisticated technical and lighting equipment. Christie recruited Fritz Busch and Carl Ebert, both now exiled from Germany, to take charge of the artistic policy at Glyndebourne.

The first Glyndebourne season in 1934 lasted for two weeks, and comprised six performances each of Le nozze di Figaro and Così fan tutte (a work that regained its place in the repertoire thanks to Buschs advocacy). The audience (as it still does today) enjoyed a unique experience: superb operatic performances complemented by dinner during the long interval in beautiful rural surroundings. The artistic standards were astonishingly high. There were no star names among the singers, but the emphasis was on the quality of the ensemble, built in that first season from outstanding, theatrically credible singers from Germany, Austria, Czechoslovakia, Finland, Italy, America, England, Scotland and Wales.

Glyndebourne soon established a national and international reputation and expanded its repertoire far beyond Mozart to embrace operas of the 19th and 20th centuries, and of earlier eras too. The original theatre was extended over the years and todays audiences at the Glyndebourne Festival are accommodated in the 1200-seat auditorium that opened in a new building in 1994.