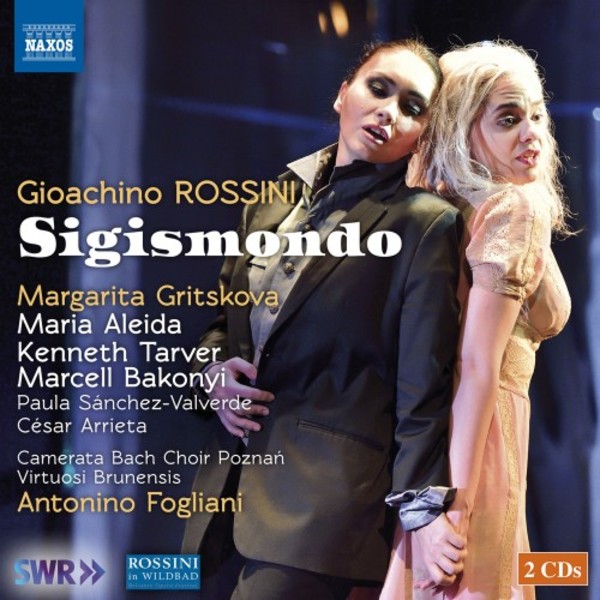 While filled with Rossinis distinctive musical hallmarks and notable for some wonderful duets, Sigismondo was one of his very few failures in the genre, for which blame is usually laid at the feet of librettist Giuseppe Foppa. Today, however, we can appreciate how this tale of an abused wife who retains her love for her deranged husband pushes the boundaries of the grand narrative tradition into a more searching psychological drama. An emphasis on madness and guilt and coloratura expressions of inner feeling results in a fascinating meeting of convention with experiment, Rossinis subsequent re-use of his music for Sigismondo in later hit operas being ample evidence of its intrinsic quality.

This Wildbad performance of Sigismondo benefits from an internationally renowned cast, with in the title role contralto Margarita Gritskova who was a triumph She finds sensitive, tender tones for the Polish king, his long-awaited death sentence for the allegedly unfaithful wife Aldimira taken almost into madness (Münsterland Zeitung). Operapronto considered Gritskova to be a deep, flexible and technically advanced mezzo-soprano, who was outstanding in this role and has faithfully performed the insanity of Sigismondo.

Deutschlandradio Kultur also singled out the accompaniment for acclaim in this production: the Czech Virtuosi Brunensis were in excellent form under the deserving musical director Antonino Fogliani.

Musical director of the Rossini in Wildbad festival, Antonino Fogliani studied conducting with Vittorio Parisi at the Giuseppe Verdi Conservatory in Milan, and made his début at the Pesaro Rossini Opera Festival of 2001 with Rossinis Il viaggio a Reims, followed by further engagements in Pesaro and in other well-known opera houses, including the Teatro La Fenice, Venice, the Teatro dellOpera, Rome, the Paris Opéra Comique, as well as at the Bergamo Donizetti Festival. His recordings for Naxos include Rossinis Ciro in Babilonia, Otello, Il viaggio a Reims and Guillaume Tell.