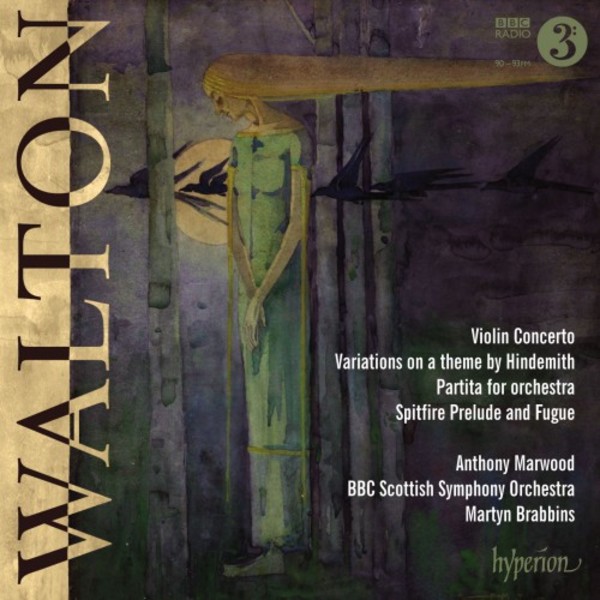 Martyn Brabbins and the BBC Scottish Symphony Orchestra follow up their definitive account of the symphonies (on CDA67794) with another outstanding album of Walton. From the sunlit Mediterranean lyricism of the Violin Concerto to the rousing Spitfire Prelude and Fugue, this is the composer at the height of his power.

Marwood is a vivacious soloist in the Violin Concerto and particularly compelling in its magnificent Passacaglia, which is expertly paced  we are left in no doubt about the levels of searing commitment - BBC Music Magazine (CDA67801: Britten - Violin Concerto, Double Concerto)

The whole disc is a credit not only to the conductor but also to the quality of the BBC Scottish Symphony Orchestra, which can stand comparison with any rival - Gramophone (CDA67794: Walton - Symphonies)

With acclaimed accounts of Waltons symphonies already under their belts, Martyn Brabbins and the BBC Scottish Symphony Orchestra turn their attentions to a wider selection of the composers orchestral music on their latest Hyperion disc. Top of the bill is the Violin Concerto, commissioned by Jascha Heifetz, no less, in 1935 (a measure of Waltons standing while still only in his early 30s) but not composed until 1938, and further revised following its 1939 premiere. Here the soloist is the excellent Anthony Marwood (formerly of the Florestan Trio), and he brings to the work not only the requisite virtuoso skills  especially in the scherzo second movement and vivacious finale  but also a chamber musicians depth of consideration and variety of tone. With sterling support from Brabbins and the BBC Scottish players, this is a performance which allows the music space to breathe, so important in a work which has such an Italianate airiness to it. From the languorous opening to the sparkling close this is an account to relish again and again, one which foregoes glib showiness in favour of a more thoughtful approach which, though not short of fireworks, will stand up to repeated listening, ideal for any collection.

The orchestra are on their mettle, too, in a engaging performance of the 1957 Partita, originally commissioned for the fortieth anniversary of the Cleveland Orchestra, with George Szell conducting the premiere as well as making the first recording. This new recording stands up well to such comparisons, and again it captures the Italianate languor, passion and spirit that infuses the entire score. The duet for oboe and viola that opens the Pastorale siciliana central movement is particularly cherishable, and Brabbins brings out all the vividness of Waltons colourful scoring. In the outer movements, the pinpoint precision of the BBC SSOs brass is exactly what this music needs.

Just as fine are the Variations on a theme of Hindemith, commissioned for the 150th anniversary of the Royal Philharmonic Society in 1963, and serving as homage to the forty-year friendship between Hindemith and Walton. From the lugubriously mysterious opening through a series of brilliantly inventive and contrasting variations, this is one of Waltons most refined scores, every bit as collectively virtuosic as the Partita, and Brabbins coaxes from his musicians one of the most assured and memorable accounts for many a year, with radiant strings and dazzlingly incisive wind, brass and percussion. The fugal Finale emerges as a tour de force, and the reflective coda has a gorgeous warmth to it.

Rounding off proceedings is a thoroughly uplifting traversal of the 1943 Spitfire Prelude and Fugue, extracted from Waltons film score for The First of the Few, which traced the development and construction of the first Supermarine Spitfire aircraft prior to the Battle of Britain. The Prelude has just the right degree of Elgarian nobility and expansiveness to it, while the Fugue (which originally accompanied the construction of the prototype) has moments of exquisite delicacy to balance the general bustle. Its a rousing conclusion to a hugely enjoyable disc. Admirable sound from the City Halls, Candleriggs (Glasgow) and detailed notes from Robert Matthew-Walker complete a splendidly attractive package.

Anthony Marwoods un-flashy individualism seems to be operating at an opposite pole to the Heifetz way, and generates memorable results of its own. While Marwood has all the virtuosity that the music demands, nothing is rushed; even with the extremes of pace and stop-start manner of the Presto capriccioso second movement, the design here hangs together quite naturally.  While the quick sections of the Hindemith Variations are just as demanding, they are excellently played here, in a performance that does real justice to this glowing and hperinventive masterwork.  Malcolm Hayes
BBC Music Magazine July 2017

Proceedings are launched in fine style with a supremely affectionate and agreeably lithe account of the immensely personable concerto that Walton conceived for the great Jascha Heifetz. Anthony Marwood proves an enviably secure and articulate soloist... Brabbinss uncommonly cogent and commendably observant treatment of the Variations strikes me as just about the best Ive encountered since Vernon Handleys characteristically unforced and wonderfully perceptive 1988 Bournemouth SO account... it all adds up to a thoroughly desirable package.  Andrew Achenbach
Gramophone July 2017

Anthony Marwood is the incisive, poetic soloist in Waltons Violin Concerto (1939, revised 1943), a work bursting with shrill, spiky exuberance and gleams of lyricism, written for the great violinist Jascha Heifetz. Conductor Martyn Brabbins and the BBC Scottish Symphony Orchestra relish the showpiece Partita (1957); Variations on a Theme by Hindemith (1963) and, from the film The First of the Few, the Spitfire Prelude and Fugue complete this exhilarating disc.  Fiona Maddocks
The Observer 9 July 2017