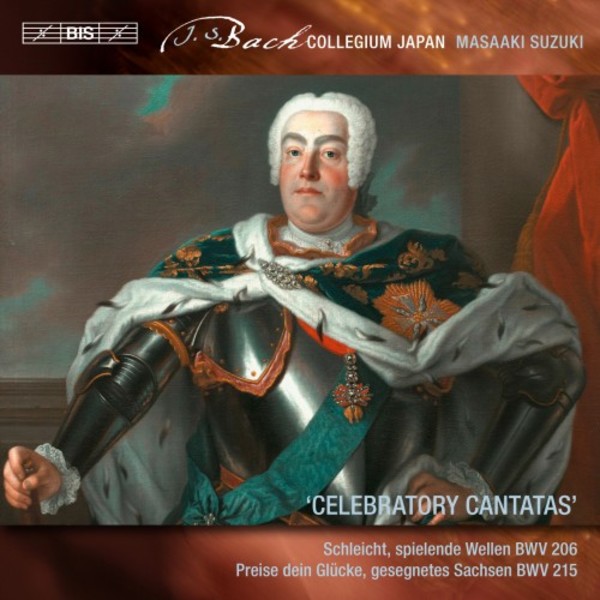 Besides the fact that they both celebrate Augustus III, Elector of Saxony and King of Poland, there is a close connection between the two works included on the eighth volume of Bachs secular cantatas. On 2 October 1734, the King and his family made a surprise visit to Leipzig, and in all haste a festive event was planned for three days later, in celebration of the anniversary of Augustuss ascension to the Polish throne. Bach was asked to provide the musical entertainment, and consequently had to put aside the work he was busy composing... namly BWV 206 Schleicht, spielende Wellen, intended for a celebration of the Kings birthday on 7 October! The new cantata, Preise dein Glücke, gesegnetes Sachsen, BWV 215, is a substantial work, and it is not surprising that Bach, with only a few days to produce it, had recourse to earlier compositions: the only parts that were written completely from scratch were the recitatives, the soprano aria and the final chorus. In the meantime, BWV 206 - the birthday cantata that Bach had to put on hold - came to good use two years later, when the Kings birthday was celebrated with a concert at Zimmermanns coffee house in Leipzig. Both works are richly scored with trumpets and timpani, and here receive suitably festive performances form Bach Collegium Japan and Masaaki Suzuki.

The liquid and brilliantly projected bass-singing of Roderick Williams is simply majestic in Schleuss des Janustempels Türen. The pure gold lies at the end when the River Pleisse, sung by the bright but deeply responsive soprano Hana Blaíková, requests each river to act its age with undivided concord and sweet harmony. The choir of three flutes, each with their dovetailing and courtly roulades, does the trick. The voicing of this late Bach canvas is simply exquisite.  Jonathan Freeman-Attwood
Gramophone August 2017