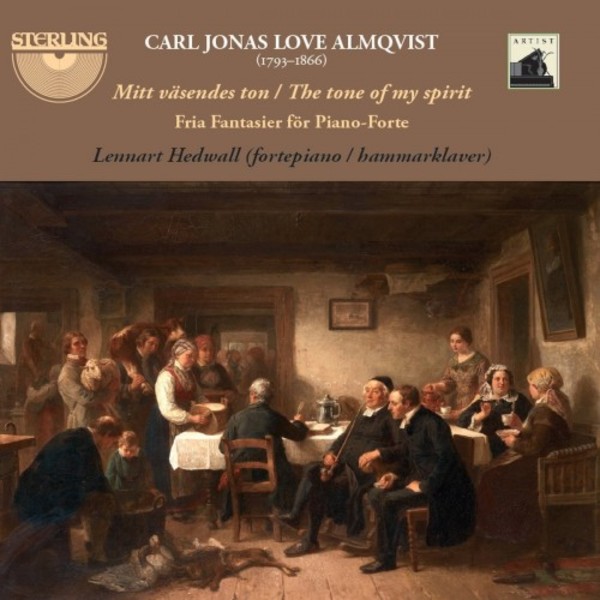 Carl Jonas Love Almqvist (1793-1866) is one of the few yet current Swedish authors prior to Strindberg. Most of his writings he collected in the universal work Törnrosens Bok (The Book of the Thorn-rose), in which he wanted to unite picture, music and script together, and mould into a single brand and thus create a kind of Gesamtkunstwerk.

He was also strictly speaking only a talented amateur, although he often claimed that deep down he was primarily a musical person. Already during or shortly after his illustrious Värmla nd adventure 1823-24  when he left Stockholm for living an idealized peasant life in the small village Köla  he produced two large note booklets, one for voices and one for keyboard. Both wear the title Free Musical Fantasies, and they associate directly to his literary counterpart, originally called Free Fantasies, which, considered as an entity, by Mr Hugo Löwenstierna sometimes called Törnrosens Bok [The Book of the Thorn-rose].

Lennart Hedwall is a musically versatile gentleman who has been active as a composer, pianist, organist, conductor, pedagogue and musicologist. He studied with, among others, Olof Wibergh, Gottfrid Boon, Tor Mann, Sven-Erik Bäck and Karl-Birger Blomdahl and in Darmstadt, Vienna and Paris.

Hedwall has in addition published biographies of Hugo Alfvén, Wilhelm Peterson-Berger, Erik Gustaf Geijer, Oscar Byström and Carl Jonas Love Almqvist, books called Operetta and Musicals, The Swedish Symphony and Swedish Music History. He discovered Almqvist's compositions in the early 1950s and has been campaigning for at symposiums and concerts and on radio. In 1984, he won together with singer Iwa Sörensen a Grammy for an LP with works by Almqvist.