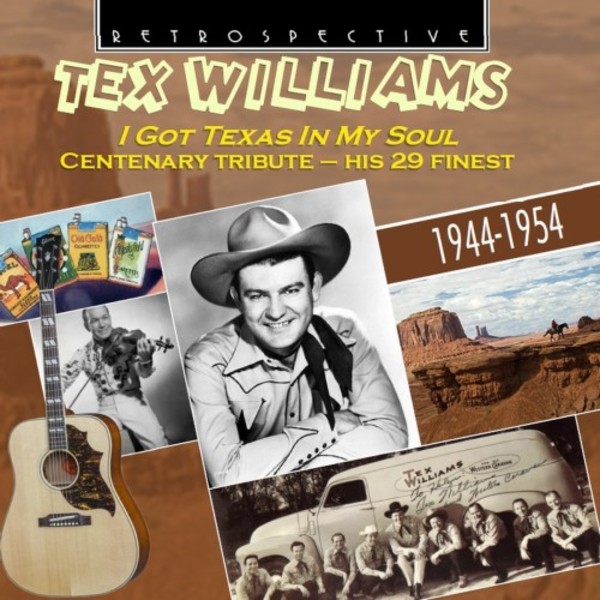 Tex Williams: I Got Texas In My Soul - Centenary Tribute

This year we celebrate the centenary of Sollie Tex Williams (1917-1985), the great Country star of the 40s (who actually hailed from Illinois), famous for his fast-talking monologues. He was one of the top ten most successful Country recording artists of the decade. After first gaining prominence, and having a number of hits, as vocalist with the Spade Cooley western swing band, he formed his own Western Caravan and went on to achieve 24 Country chart successes between 1946 and 1974. I Got Texas In My Soul makes a notable addition to Retrospectives Country list. Of the relatively few Tex Williams CDs currently on the market, none cover his late-40s golden period so comprehensively.

Tex had Capitol Records first-ever million-seller with Smoke, Smoke, Smoke That Cigarette! (ironically, he eventually died of lung cancer) and eight others of the genre that became his speciality are included (Life Gets Teejus, Dont It?). But with all his songs delivered in laid-back style by his warm bass-baritone voice, it is easy to see why he was so popular. Six of his recordings with Spade Cooley and his Orchestra are featured, all of them big hits such as the No.1 smash Shame On You. In fact, all 19 of Texs Country Hits charting at No.15 or above are featured, 13 of them Top Fives (e.g. Dont Telephone, Dont Telegraph, Tell A Woman). The musical range is surprisingly wide, stretching as it does from the simple, chirpy California Polka to the adventurous Stan Kenton number Artistry In Western Swing. And, as a special bonus track, there is Texs 1960 cover version of possibly the biggest ever country hit, Hell Have To Go.