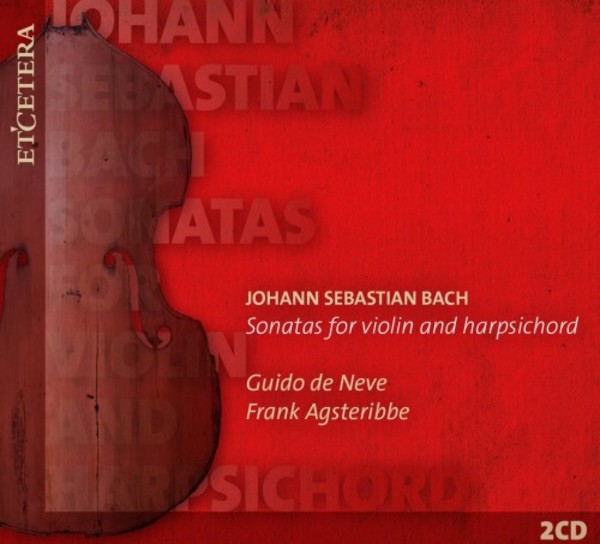 During their many concerts that have featured sonatas by Johann Sebastian Bach since 2010, violinist Guido de Neve and harpsichordist Frank Agsteribbe have delved increasingly deeply into the rhetorical expressiveness of the great German composers music. Nowadays, historically informed performances have become a common feature of the many concerts, festivals, publications and recordings on offer. Many musicians and ensembles have specialised in high quality and historically informed performances of music from the 17th, 18th and 19th centuries . A great deal has also been written about the link between rhetoric and 18th century music, but few performers have been able to put this historical knowledge to such good use in their work. Very often, too much or even sole emphasis has been placed on beauty, rich tonal colour and a fast tempo. Guido de Neve and Frank Agsteribbe have forged ahead with the expressive development of (historical) tonal characteristics in the six sonatas for violin and harpsichord by J.S. Bach as part of a project funded by the Royal Conservatoire of Antwerp  AP University College with the research group Uitvoeringspraktijk in Perspectief (Performance Practice in Perspective).

Guido de Neve and Frank Agsteribbe are convinced that taking the descriptions of 18th-century music theorists seriously, such as Junker, Bemetzrieder/Diderot, Rousseau and Mattheson, enables them to get closer to the essence of German Baroque music. They perform the music of a Bach who, for all his greatness, is also a man of flesh and blood, who could be anxious and despairing or brilliant and bold, instead of an abstraction based solely on an objective interpretation of his scores.

For the interested listener, this means that Bachs music is not only spiritual, but also sensual, and a whole new facet of his art has been revealed - it is about art being connected to life itself.