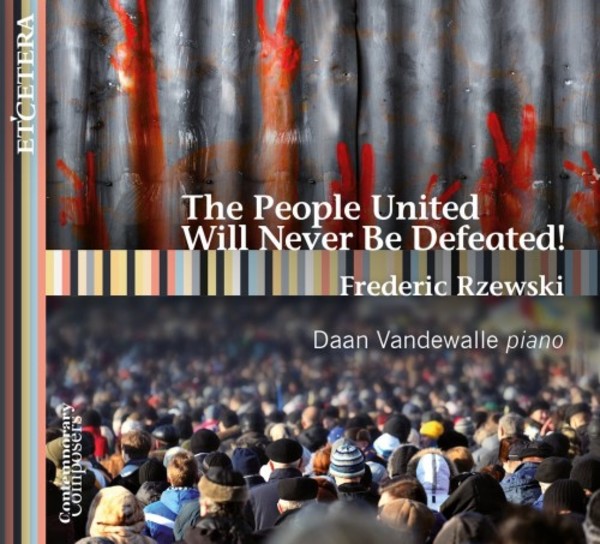 Rzewski - The People United Will Never Be Defeated!

Fredric Rzewskis The People United Will Never Be Defeated!, written in September-October of 1976, is now an acknowledged masterpiece of the later 20th century: because of its scope, its scale, its expressive power, its compositional virtuosity, and the skill of its piano writing. It was originally made for Ursula Oppens, and over the years it has been regularly performed and recorded, by her and a number of other notable performers, including the composer himself. And now Daan Vandewalle, a specialist in contemporary and experimental music, and a particularly thoughtful and exploratory performer, has engaged with this music and recorded it. The music, in my hearing , beginning in 1978 and continuing to this year, 2017, hasnt really changed much. When first heard the piece was notably ambitious and distinctive. Though reflecting a range of other musics, it was nevertheless like nothing else. That still remains the case. And the relevance of the pieces larger political themes have not, unfortunately, changed much either.

The pianist Daan Vandewalle is an internationally acclaimed performer of 20th and 21st century piano music. His repertoire consists of hundreds of pieces, integrales of most of the well-known composers of the 20th century such as Charles Ives, Olivier Messiaen, as well as numerous premieres that resulted from intense collaborations with composers of today. He has performed in a wide range of venues, from small clubs in the underground experimental music scene to established venues such as the Prague Spring festival, the Lincoln Centre in New York or Theatre des Chatelets in Paris. Apart from his work as a soloist he forms a piano-duo with the legendary Australian pianist Geoffrey Douglas Madge, and duos with cellist Arne Deforce and singer Salome Kammer. In 2017 he played the world premiere of Rzewskis Songs of Insurrection at the Concertgebouw Bruges.