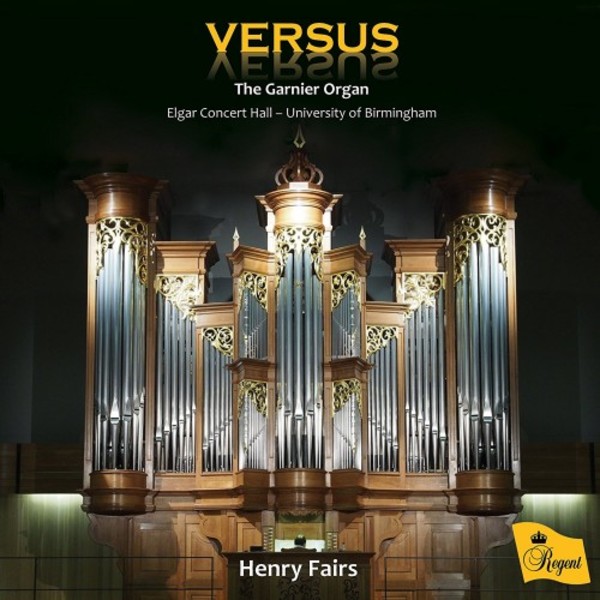 Versus: The Garnier Organ, Elgar Concert Hall, University of Birmingham

The first recording of the new Garnier organ in the Elgar Concert Hall at Birmingham University played by the organ's curator, and international concert organist, Henry Fairs. Featuring music by JS Bach, Bruhns, Schumann, Danksagmüller, and Lauvik, this wide-ranging programme of music from the 17th to 21st centuries exploits the full tonal resources of this wonderful instrument, which is a major contribution to Birmingham's centre of excellence in organ performing and teaching.
Effectively two separate instruments the player turns round to play the 'Chair' organ. This is exploited in Franz Danksagmüller's new work Versus (Latin: turned), commissioned for the opening recital in November 2014, and forming the centre-piece of this symmetrical programme which begins and ends with major works in C major by JS Bach played on the larger instrument.
Henry Fairs is Head of Organ Studies at Birmingham Conservatoire, Organist to the University of Birmingham and Honorary Professor of Organ at the University of St Andrews. He has won ten prizes in international organ competitions, and appeared in festivals throughout Europe and in North America, Canada, Russia and Japan, performing solo recitals, broadcasts and concertos on both historic and modern instruments. He is regularly invited to serve as a jury member, examiner, guest tutor and speaker. His students include a number of prize-winners in international competitions.
Henry was closely involved with the recent installation of the Garnier organ and will be responsible for commissioning a number of new instruments at Birmingham Conservatoire's new home over the coming years.