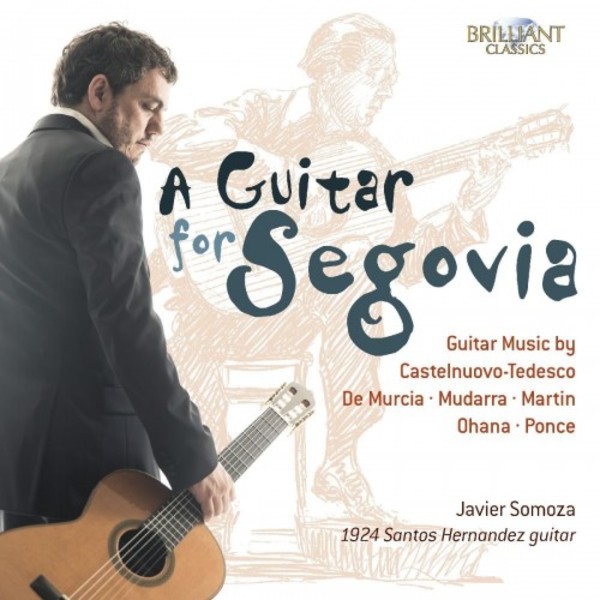 A Guitar for Segovia

Variations through the centuries, op.71

Variations through the centuries, op.71

There are two themes to this recording: the time-honoured genre of the folía, and an instrument made for and played by the greatest guitarist of the 20th century, Andres Segovia. With his determination to expand the repertoire of guitar music and extend the instrument beyond its associations with his native Spain, Segovia commissioned three works played here by Javier Somoza: the Variations à travers les siècles by Mario Castelnuovo-Tedesco, Variaciones y Fuga sobre la Folía de España by Ponce and a set of Four Short Pieces by Frank Martin. Segovia eventually decided that Martins idiom was too dissonant for his taste and so never played them, but the pieces have since become classics of the mid-20th-century repertoire alongside works by Britten and Henze.
As their titles suggest, however, the other two works have a conscious relationship with the history of the guitar and its repertoire, developed from the lute and vihuela of previous centuries. Ponce only partially fulfilled Segovias request for a series of brilliant variations on the Folías de España theme [...] in the Classical Italian style of the 18th century. What resulted was a monumental, thoroughly eclectic work definitely not in 18th-century style. Segovia, again, decided to adapt the piece for his own ends but Somoza has returned to the original. Meanwhile Castelnuovo-Tedesco, in his first work for the guitar, also consciously embraced eclecticism in a series of different idioms: a stylized chaconne reminiscent of early music; a free variation, a waltz, and a foxtrot.
There is one more modern work on the album  the dazzling Tiento by Maurice Ohana that also looks back to 18th-century Spanish idiom  which functions as a pivot between the ages. Two examples of the folía theme-and-variation form by Santiago de Murcia date from roughly 1730; and to open, Somoza travels back in time to the tientos of 16th-century Spain with three brief works by Alonso Mudarra. A Guitar for Segovia is both an absorbing journey through the history of guitar music and an important record of a Segovia instrument: a significant addition to the expansive library of guitar music on Brilliant Classics.