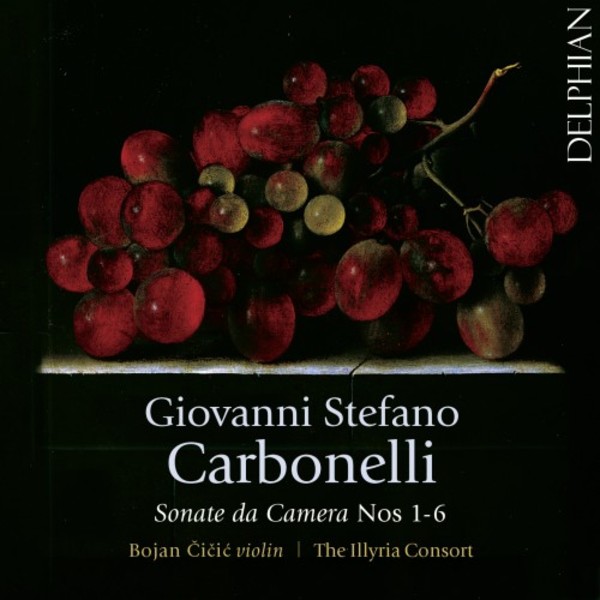 In certain respects, Giovanni Stefano Carbonelli does not quite fit the eighteenth-century mould. For a neo-Corellian, he is unusually fond of complexity, both technical and compositional, and also unusually open to other contemporary influences, such as those of Handel and Vivaldi. But the quality of his music speaks for itself  virtuosic and joyously melodic, these six chamber sonatas had a huge impact on Delphian producer Paul Baxter. Carbonellis difficulty has ensured that his work is seldom played, but early-music rising star Bojan Čičić makes sure we have no sense of that as he and his Illyria Consort colleagues champion these groundbreaking compositions with exuberant confidence. Bojan Čičić is leader of Floreligium and frequently guest directs the Academy of Ancient Music and European Union Baroque Orchestra. He founded The Illyria Consort to explore rare repertoire of the seventeenth and eighteenth centuries. This is their first recording.

string playing of real vitality, rhythmic verve and dramatic engagement  here is articulation so smart you could cut your finger on it, a rich tonal range and an abundance of exuberantly improvised decorations from leader Bojan Cicic  The Spectator, August 2015

Performances abound in real vitality, rhythmic verve and dramatic engagement, and Carbonellis genius is allowed to shine in all its exuberance.
Music & Vision 24 June 2017

[Carbonellis] own music is stately, taut and elegant in the hands of Bojan Čičić (a UK-based Croatian violinist) and his excellent Illyria Consort. They sound effortlessly stylish in these six chamber sonatas  Čičić makes even the high-wire showy stuff sing with a lyricism that is shapely, aerated and totally unforced.  Kate Molleson
The Guardian 8 June 2017

These performances are eloquent, engaging and really nicely ornamented. Its one of my favourite discoveries this week.
Record Review (BBC Radio 3) 24 June 2017