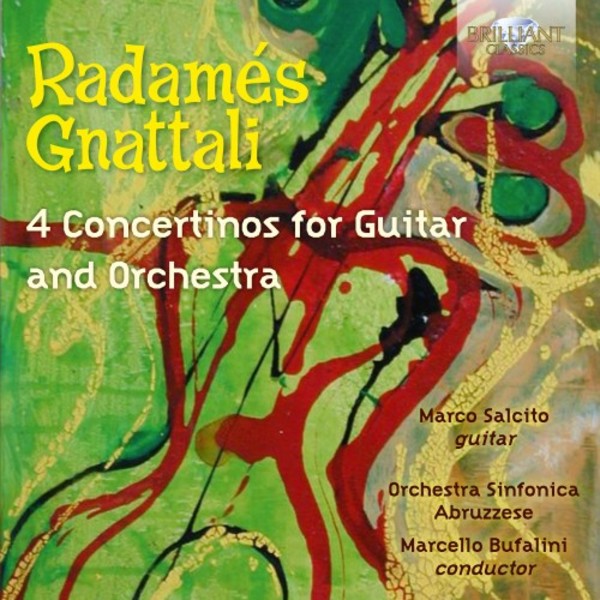 Brazilian composers already feature in the extensive library of guitar music on Brilliant Classics: not only the obvious name of Villa‐Lobos (BC9196) but on a more diverse survey by Flavio Apro (BC94810), including lesser‐known names such as João Pernambuco and Egberto Gismonti whose work also fused traditional Brazilian genres with elements of jazz, classical, world and contemporary music.
To their names may now be added Radamés Gnattali (1906‐1988). Having composed much music of a consciously national flavour in the early part of his career, emulating Villa‐Lobos, he sought a broader appeal during the 1950s with works such as these four guitar concertinos, dating between 1951 and 1967, which use neo‐Romantic and neo‐classical moulds while maintaining the light style often associated with symphonic jazz. The tricky balance between guitar and orchestra is skilfully handled by means of dialogue and contrast, investing the structure of each work with a degree of intimacy more usually associated with chamber music.
The Second Concertino was written for Aníbal August Sardinha, known as Garoto, one of the creators of the bossa nova sound. Even though the concertino clearly reflects the guitarists manner of playing, the first movement also reveals the influence of American composers such as Bernstein and Gershwin, the third that of the new trends in symphonic and progressive rock music, with its pressing patterns, while the second embodies something of the melancholy typical of the bossa redolent of saudade. The Third is scored for an unusual ensemble of guitar, flute, timpani and strings, in which the flute also has a soloistic part; the Fourth returns to a string‐only ensemble for accompaniment.
These premiere recordings are the work of Marco Salcito, who returned to Gnattalis original manuscripts to edit the scores afresh; all guitar‐music enthusiasts will be keen to hear his work.