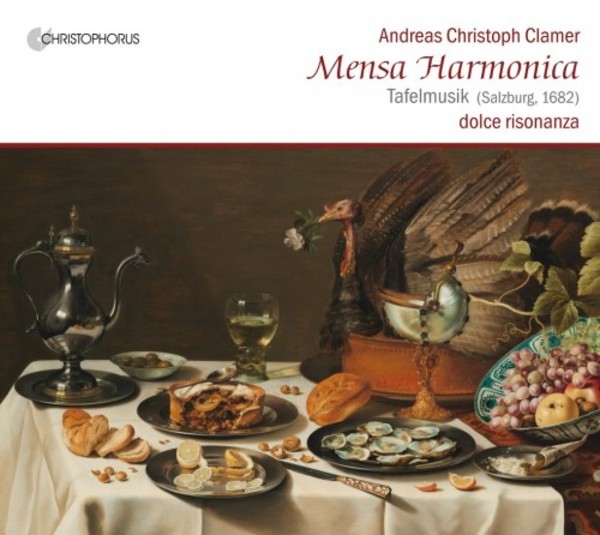 In October 1682, the luminaries of the Holy Roman Empire came together in Salzburg for a seven-day sumptuous feast celebrating the 1100th anniversary of the foundation of the Prince-Archbishopric of Salzburg. The city provided a stage for the flamboyant host, Prince-Archbishop Maximilian Gandolph, Count of Küenburg: power and self-presentation have always gone hand in hand.

Due to their sensitive instrumentation, the suites of the Andreas Christoph Clamers table music Mensa Harmonica were most probably performed at these festivities within a small-scale gathering. Alongside performances in the private chamber of the Prince Archbishop, it is conceivable that the works were also played at open-air concerts, perhaps in the pleasure garden at Castle Hellbrunn with its famous fountains. It was customary to listen to 'sweet music' while occupied in 'most pleasant entertainment' such as dice and card games.

Little is known about the composer Andreas Christoph Clamer. The son of Salzburg cathedral organist and Hofkapellmeister Gaudenz Clamer, was born in 1633 and most probably enjoyed a musical education at the cathedral music school. In 1682, Clamer is described on the cover of his Mensa Harmonica as master of ceremonies of the Salzburg cathedral chapter. Alongside this function, he was appointed as Instructor of the choristers and ultimately as 'Regens Chori' of the royal choral music in the cathedral.